Radio will have a strong impact on undecided primary voters as we move into the heart of primary season, per a Nielsen Audio study commissioned by the Katz Radio Group.

Approximately one-third of all registered voters in those three states can still be swayed by political messaging, notes the study. These voters comprise the so-called “Opportunity Vote.”

Radio has the deepest reach in this electoral group. In Virginia, Colorado and Texas, radio reaches 93.2% of the Opportunity Vote, more than any other medium.

Texas and Virginia are states that hold strong delegate counts, making them essential for candidates to rack up enough delegates in the race to the conventions.

Broadcast TV and cable TV each impact 89.9% and 89.8% of those persuadable voters, respectively. Desktop reaches 87.8% of the Opportunity Vote and mobile 64.4%.

About one-third of the Opportunity Vote tune into radio significantly more often than they watch TV, listening to roughly two hours of radio daily compared to less than one hour of TV. 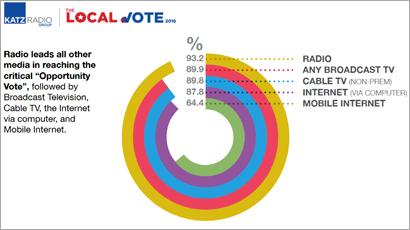