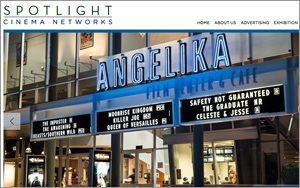 Like other branches of out-of-home advertising, cinema advertising companies are trying to figure out how to leverage practically mobile devices on behalf of their advertisers. One of the most promising ways is through audio recognition apps that allow marketers to engage with consumers through content, forming relationships that (hopefully) continue after they leave the theater.

Spotlight Cinema Networks, a relatively small player alongside the two dominant cinema ad companies, NCM and Screenvision, has formed a partnership with The Tone Knows, an audio recognition technology company, to integrate mobile interactivity into its on-screen programming and advertising content.

Marketers using the Tone platform can send a silent tone to moviegoers’ smartphones when their advertisement is shown during either Spotlight’s preshow or Trailer Pod programs, offering consumers who have opted in digital coupons, videos, retail partner graphics, links to incentives, and localized messaging for outlets such as auto dealerships, or encouraging entertainment tune-in.

To receive the offers and other content, moviegoers just have to download Spotlight’s CineLife app and activate it on their mobile device. Spotlight is promoting the app throughout its network of luxury and independent theaters, which altogether operate around a thousand screens.

Spotlight president Michael Sakin noted that the Tone integration allows theater owners and marketers to deliver messages to moviegoers’ mobile devices after they have left the theater, if desired, in order to avoid disrupting both the theater experience and the cinema ad environment.

Sakin explained: “Cinema is one of the strongest advertising mechanisms out there because of the recall and the captive audience. Everyone is trying to figure out how to extend that message via mobile devices without annoying the audience and taking away from the cinema experience. The collaboration with Tone Knows is really the first time we have been able to work with a partner in a way that doesn’t intrude on the message.”

The bigger cinema advertising networks have been employing mobile audio recognition technology for several years, although most applications are still in the experimental stages.

Among Spotlight’s larger peers, NCM has a partnership with Shazaam, while Screenvision works with Soundhound.