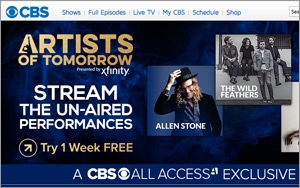 CBS has made a first-ever deal with Cablevision Systems, in which the cable operator will provide live streaming of CBS programming.

Live programming from CBS includes daytime, prime-time and late-night CBS shows, special events, local news and sports. All available on desktop devices, on iOS and Android mobile devices and tablets through the CBS App and through Chromecast by casting from their desktop, iOS or Android device.

Cablevision and CBS signed a multiyear content carriage agreement last year, in which Cablevision also became the first cable or satellite provider to announce plans to distribute CBS All Access and Showtime Internet services to its customers.

Cablevision has more than 3 million customers in the New York tri-state area for its TV, phone and Internet services.