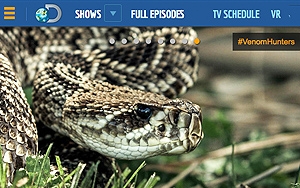 Discovery Communications’ stock price took a hit due to worse-than-expected earnings and revenues.

Analysts say Discovery's financial results were, for the most part, worse than projections. Specifically, cash-flow (earnings before interest, taxes, depreciation, and amortization) was lower, down 10% to $574 million.

As with other media companies, Discovery witnessed improving U.S. advertising revenues in the fourth quarter. But its international networks declined, due to unfavorable exchange rates.