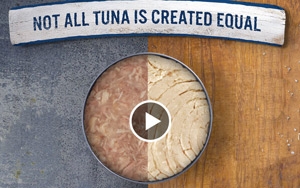 The voiceover declares that “not all tuna is created equal,” and describes the albacore as “responsibly caught, wild tuna that’s high in protein and tastes delicious.” The tagline ends the spot: “Only Bumble Bee albacore will do.”

The video is being featured on the brand’s Web site, as well as its YouTube site and other social channels.

The campaign, to run throughout 2016, also includes print and in-store promotions.

In research, the brand — the U.S. leader in albacore and shelf-stable seafood as a whole — found that just 5% of U.S. consumers understood the differences between chunk light and solid albacore, David Melbourne, SVP of consumer marketing and corporate social responsibility for Bumble Bee Foods, told seafood trade publication Undercurrent News.

The category is viewed as outdated, and tends not to be among the options that come to mind in planning meals, he said.

“We know that chunk light tuna serves a role in the category, but we also learned that many consumers are looking for a higher-quality product that can be used in a variety of fun, contemporary recipes — not just the same old tuna salad — and solid white albacore provides a healthy and convenient solution,” Melbourne said. Given that many “don’t even know what solid white albacore is, or don’t remember why it’s such a great, go-to-source of quality lean protein, we wanted to showcase the differences.”