As 'Downton Abbey' Nears Finish Line, The Claws Come Out 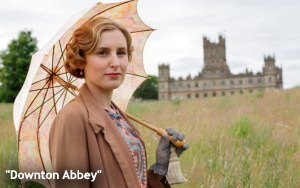 Spoiler alert: This blog reveals some (but not all) plot points and storylines from last night’s episode of “Downton Abbey”:

It was the second-to-last episode of “Downton Abbey,” but it was so rich, it played like a finale right up until the final scene -- with Lady Edith, still single, watching her daughter Marigold playing with cousins Sybie and Master George around the grave of Sybil, Lady Edith’s sister.

The scene captured the collision of past, present and future -- a recurring theme on the show, particularly in this final season as the great English estates, Downton included, are struggling to survive.

Of course, where Downton is concerned, “struggling” might be too strong a word since the Crawleys don’t seem to be struggling all that much as they continue to have their car doors opened for them by footmen and enjoy sumptuous meals prepared and served by cooks and butlers.

All the same, Sunday night’s episode had a bite to it that has been lacking this season. Basically, everyone has been a little too nice these last few weeks as a saccharine sweetness appeared to take hold of the show in its final season.

That wasn’t the case last night as various characters bared their fangs in scene after scene. Most notable of all had to be the shocking behavior of Mary as she willfully sought to block the possibility that her sister Edith would finally achieve a modicum of domestic happiness with her suitor Bertie, who had just inherited a noble title that outranked them all.

A highlight of the episode, if not the entire series, was Edith’s blistering takedown of her sister -- twice calling her a bitch in a confrontation that was long in coming.

Mild-mannered brother-in-law Tom Branson hammered Mary too in one of the episode’s best scenes. And yet, by the episode’s end, it was Mary who found domestic bliss, marrying the dashing Henry Tolbert. Meanwhile, Edith (pictured above) was once again alone, leading one to wonder if the “Downton Abbey” writers have it in for Lady Edith -- undermining her romantic life again and again and again.

Elsewhere, Robert clashed with his sister Rosamunde, Mary clashed with her parents for inviting Henry to dinner, Isobel Crawley laid down the law with Lord Merton’s scheming future daughter-in-law, and almost everyone had a cruel laugh over Mrs. Patmore’s predicament when the London newspapers seemed to get hold of the story that the first guest in her new B&B was an adulterous doctor.

The beloved Downton cook was on the verge of financial ruin and all her colleagues and friends could do was laugh about it behind her back. Fortunately, the Earl, sister Rosamunde and Countess Cora came to Mrs. Patmore’s rescue.

Good fortune also came to the footman Mr. Molesley, who began his teaching career in the local school and appeared to captivate his young charges with a discussion on the divine right of kings.

Oh, and the episode’s biggest surprise? The “female” advice columnist making a splash at Edith’s magazine under the nom de plume of “Cassandra Jones” turned out to be none other than Sprat, the put-upon butler in the Dowager household. Can this really be true?

One more episode of “Downton Abbey” remains to clarify the Sprat story and several others. Perhaps the biggest question: Will Bertie reconsider and return to Edith and give her story a happy ending? Or will Edith’s happy ending be something else -- perhaps a future as a new kind of woman, a single mother who is also a titan of magazine publishing?

To find out, “Downton Abbey” fans must wait two weeks. The show is taking this coming Sunday off to avoid having its series finale compete with the Oscars on ABC. In its place Sunday night -- a new documentary about the making and manners of “Downton Abbey” -- “More Manners of Downton Abbey,” a sequel to a previous special on the same subject.