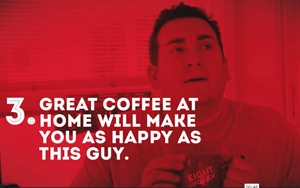 Packaged whole-bean coffee is getting its close-up moment, courtesy of a new radio, social and PR campaign from Eight O’Clock Coffee.

The campaign uses playful hyperbole to reveal a big “secret”: Coffee lovers needn’t spend lavishly at coffeehouses; they can make their own “perfect” cups at home by grinding and brewing Eight O’Clock’s “high-quality, affordable” whole beans.

Starting this week, those are being supported with ads on social media targeting users in the same markets with a video: “Revealed: Secrets Coffee Houses Don’t Want You to Know.”

The video (also being promoted on the brand’s social media channels) shows a still-sleepy guy choosing a package of Eight O’Clock whole beans from among many varieties in his kitchen cabinet, throwing some into a grinder, brewing them and ecstatically savoring (above) an aromatic cup of java. During the segment, on-screen titles provide the three secrets: “Great coffee is closer than you think”; “grinding beans yourself can change your life”; and “great coffee at home will make you as happy as this guy.”

The video’s launch was also promoted to targeted media, who received “top secret” packages, including samples of the brand’s whole-bean coffee, alerting them that Eight O’Clock would be “shattering a centuries-old veil of secrecy that’s surrounded the coffee industry” during an online event on Feb. 22 (at 8 a.m., of course) at www.eightoclock.com/secretreveal.

The brand simultaneously announced, on that site page and its social media channels, the launch of a giveaway of "Coffee-House-Crusher" prize packs consisting of packages of Eight O’Clock whole-bean coffee, a Black and Decker Grind & Brew coffee maker, a Friis Whole Bean Coffee Vault (a storage canister designed to preserve beans’ flavor). After Feb. 22, fans will also have opportunities to enter for chances to win packs on Feb. 29 and March 7, and they’ll be seeing more social media efforts in the coming weeks.

The S3 Agency devised and is implementing the campaign's social media and PR components, including the video and the campaign landing page on the brand's site (the agency was the designer of the overall site).

Eight O’Clock has a long history of being a leader in whole-bean coffee. It originated nearly 160 years ago as A&P’s house brand, available exclusively in the whole-bean format. For many years, A&P (which recently went bankrupt and is being sold off in pieces) provided in-store machines so that customers could custom-grind their beans. For a time, some other retailers carrying the whole-bean product also offered in-store grinders.

This is among the first Eight O’Clock marketing efforts focused specifically on the whole-bean line since Tata bought the brand.

Eight O’Clock, along with the fiercely competitive packaged coffee category as a whole, has had its ups and downs in recent years. The category saw an upsurge in the post-2008 recessionary years as consumers cut back on coffeehouse spending. But it’s seen modest growth in recent years, mostly driven by double-digit growth in the single-serve format.

Tata Global — which as of 2014 generated an estimated 18% of its revenues from Eight O’Clock — partnered with Green Mountain in 2012 to launch Eight O’Clock K-Cups for Keurig machines, and grabbed a 7% share of the single-serve market within two years, according to BusinessStandard.com.