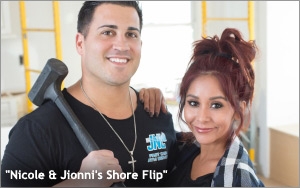 On the home shows, pairs are in -- whether they be married couples, twin brothers or bickering brokers.

HGTV sets the tone for all trends in real-estate reality TV with its pairings: Twins Jonathan and Drew Scott on “Property Brothers,” renovators Chip and Joanna Gaines on “Fixer Upper,” flippers Tarek and Christina El Moussa on “Flip Or Flop,” and designer Hilary Farr and realtor David Visentin on “Love It Or List It.” These shows must be very successful indeed, because HGTV airs them constantly.

Couples are the centerpiece of that other nightly HGTV mainstay “House Hunters.” He wants move-in ready! She wants a fixer-upper with character that will require renovations! Surprise, surprise -- she wins.

Celebrities occasionally get into the act too. With his rap career on -- ahem -- hiatus, Vanilla Ice went into the home-renovation business in Florida and then starred on “The Vanilla Ice Project” on the DIY network.

And now, the durability of the couples concept in home-renovation programming gets put to the ultimate test with the arrival of “Nicole & Jionni’s Shore Flip,” premiering Wednesday night (Feb. 24) on the cable channel known as FYI.

Nicole is Nicole Polizzi -- better known as Snooki from “Jersey Shore.” Jionni is Jionni Lavalle, her husband. They were married in November 2014 after having two children -- Lorenzo, now 3, and Giovanna, 17 months. They live in Florham Park, N.J., in a house that was custom-built.

According to the backstory they provide on the premiere episode of their new show, this experience in home construction got them interested in the house-flipping business -- renovating rundown homes and then selling them for profit.

In the one-hour premiere, they look at a handful of homes in Brick Township, N.J. and then settle on one, which they then renovate and decorate for sale. The house is not exactly on the shore, but it is on some sort of river or canal where residents dock their boats.

So that’s the show -- a concept not at all different from the couples shows seen elsewhere. The fascination here is with Snooki herself and the way she has reinvented herself since the days when she became famous for stumbling drunkenly down the Seaside Heights boardwalk by day and brawling in boardwalk bars by night on “Jersey Shore.”

In a nutshell, she lost a lot of weight, undertook a fitness regimen, became a mom and cleaned up her act (or at the very least, she hasn’t been photographed in public making a spectacle of herself in quite a long time).

She is shrewdly walking a fine line between acknowledging her partying past as “Snooki” while promoting her present self as “Nicole,” the straight-and-narrow wife and mother. Take the title of her new show, for example: It manages to omit the words “Snooki” and “Jersey,” yet the “Shore” connection is obvious and intentional.

In the show, she admits she was a “hot mess” on “Jersey Shore” -- a tactic known to publicists as “taking ownership” of your story, for good or bad. She and Jionni both admit on the show that they met in a Jersey shore club when they were both drunk back in the “Jersey Shore” days.

With this new TV show, she’s now reimagining herself as a home renovator and interior designer -- and believe it or not, she makes this idea believable. Clearly, our little Snooks has turned out to be smarter than we all thought. The prediction here: Next stop for Nicole/Snooki will be home-shopping, where she’ll hawk all kinds of Snooki products and fashions for the home.

Predictably, Nicole’s role on her show is to be the “cute” little woman who wears leopard-spotted rubber boots and safety goggles studded with costume-diamonds to the renovation site. The men of the construction crew then watch with bemusement as little Nicole swings a sledgehammer.

The character that makes this work the most is her husband, Jionni. Unlike so many reality-TV personalities, he comes across as a normal guy who loves his life and his wife.

Whether or not this dynamic is unique or interesting enough to compel viewership for “Nicole & Jionni’s Shore Flip” week after week remains to be seen. However, judging from what I’ve seen so far, the smart money is on Snooki to succeed.