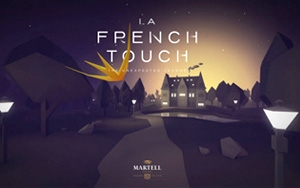 To promote a new, limited-edition cognac, The Martell House and agency AKQA have created a stereoscopic 3D VR that takes mobile users on a virtual journey from Cognac, France to Shanghai, China.

The experience is optimized for iOS8+ or Android 4.4+ and works on any popular mobile browser.  (A non-3D 30-second teaser can be viewed on YouTube.)

The limited-edition cognac, La French Touch by Martell, was created by Etienne de Crécy, a pioneer of the House cult music movement.

The experience “pushes the boundaries” of WebGL for the mobile Web with fully immersive, 360-degree game play allowing viewers to explore their surroundings by turning their heads, reports AKQA.

Players take control of an animated “swift bird” image (Martell House’s symbol), flying through 3D animations that pass a river and Paris at night and cross mountains and an ocean, before arriving at a bar in Shanghai. Along the way, players can collect items to score points and share their achievements on social.

The experience is available in English, Vietnamese, “simplified” Chinese for mainland China, and traditional Chinese for Hong Kong and Taiwan.