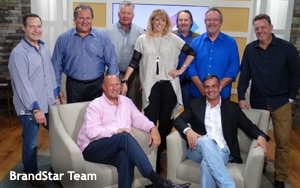 BrandStar Marketing is a multi-screen marketing and advertising agency that will provide a range of  traditional, digital, mobile and social marketing services, the agency said.

BrandStar ListnTV is a content channel  owned by the firm and for which it will produce original, branded entertainment including shows such as  The Balancing Act, Designing Spaces, Military Makeover, Mission Makeover, Access Health, Offices Spaces, Live Life Forward, and Spanish language show Marcando Pasos.

BrandStar Studios operates an HD production facility with two sound stages and full support services for any type of production.

Founder Alfieri specializes in national branded entertainment programming airing on Lifetime and wanted to leverage this skill into a full-service agency. At the same time, Patregnani, former CEO of Zimmerman Advertising wanted to develop a new modern marketing company and together they crafted BrandStar to focus on consumer-brand connections, content and engaging experiences.

Alfieri rolled his existing branded entertainments shows into the new company and they added about 75 staffers to open the 150-person agency. They expect to more than double that number by the end of 2016. In its first few months of operation, the agency has racked up more than $80 million in billings.

The name  is derived from the founders’ belief that brands become stars when they provide “solutions to everyday life,” they stated.