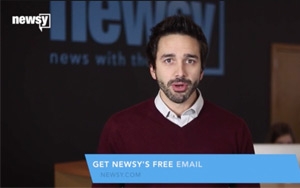 An October 2015 report from Forrester Research said consumers 18 to 31 will increasingly be dropping or avoiding a pay TV subscription package in the coming years, and by 2025, half of those consumers will have either “never” had a TV package (35%) or have cut the TV packages they had (15%).

“This audience [of cord cutters] is increasingly harder to find on cable TV, which is why we’ve developed video news experiences in formats specifically for digital device," stated Blake Sabatinelli, general manager of Newsy.

"The open nature of platforms like AppleTV will give rise to new entrants that will change the user expectation of news delivery, and will compete for the same audience as the largest broadcasters," Klosowski said.

According to SpotX, advertiser spend on connected TV on the SpotX platform increased 570% from Q3 to Q4 in 2015, and publisher CPMs nearly doubled on average.

Newsy, which describes itself as a "preferred content partner for premium publishers who want to connect with a millennial audience" on its site, was bought by the E.W. Scripps Co. in 2013 for $35 million.