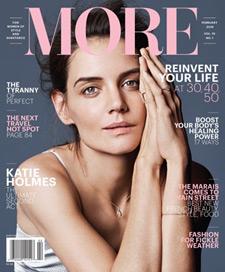 Another big consumer magazine is closing up shop. On Thursday, Meredith Corp. announced that it is shuttering More, its lifestyle title targeting affluent women, effective with its April issue featuring Diane Lane on the cover. The publisher stated that it is closing More and "deciding rather to invest and align its resources against more profitable activities."

Launched in 1997, More maintained a large and attractive readership until the end, with a monthly circulation of around 673,000 and an audience profile skewing toward well-heeled women.

However, Meredith pointed to continuing "advertising challenges in the luxury marketplace," noting that the magazine had never fully recovered from the effects of the economic downturn at the end of the last decade.

The shuttering of the magazine may involve up to 30 layoffs, but Meredith said it will try to place at least some employees in other positions in the company.

The decision to close More comes not long after Meredith agreed to terminate a planned merger with Media General, allowing the latter to proceed with a rival merger deal offered by Nexstar. Both mergers would have focused predominantly on broadcast TV assets; Meredith accepted $60 million in cash in return for freeing Media General from their agreement.

Meredith is hardly alone when it comes to shuttering titles. In December, Rodale shuttered Running Times, and in November, Conde Nast closed men’s lifestyle mag Details. Back in October, Time Inc. announced it was closing All You, its title targeting value-focused shoppers.