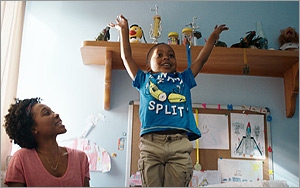 While many retailers have been singing sad songs about fickle digital shoppers this quarter — and even closing stores as a result — J.C. Penney’s turnaround is gaining power.

The Plano, Texas-based chain says comparable-store sales climbed 4.1% in the fourth quarter, above expectations, and total sales increased to $4 billion, from $3.9 billion in the same period last year. It saw growth in all regions gaining, and says home, its Sephora stores, footwear and handbags turned in the best results.

“Our focus on private brands, omnichannel and revenue per customer is clearly resonating as we continue to win market share in a competitive environment,” says CEO Marvin R. Ellison in announcing its results.

The company also unwrapped a new advertising campaign, themed “Get Your Penney's Worth.” The spring effort is based on the introduction of “Penney Days,” and will make certain private-label items available for — you guessed! — a penny. The company says the strong focus on low prices is meant to build excitement that every trip will be a treasure hunt. "The launch of this new brand promise underscores our strategic focus on building private brands and revenue per customer to create sustainable loyalty,” says Mary Beth West, its chief customer and marketing officer, in the announcement. "We want to be the shopping mecca for the modern American mom, which means we need to dimensionalize the idea of worth. We know our customers live very busy lives and we want every trip and interaction at JCPenney to be worth her time, her hard earned money and her effort."

The campaign includes weekly fliers, digital marketing and 15-second TV ads, as well as a social media effort built around the #SoWorthIt hashtag.

Penney’s campaign speaks to the intensely promotional battle retailers are locked in, wooing customers by cutting prices. Macy’s and Wal-Mart posted weaker results for the quarter, and announced store closures. And now, Kohl’s is following suit, with plans to close 18 stores.

Kohl’s says it eked out a small sales gain to $6.39 billion, from $6.33 billion in the year-ago quarter. Net income fell 20% to $296 million, from $369 million a year ago. And where JC Penney expects sales to rise between 3 and 4% in the year ahead, the Menomonee Falls, Wisc.-based Kohl’s is now forecasting gains of between 0 and 1%, and says it is shuttering 18 stores, and testing a new smaller-footprint concept and opening seven of these smaller stores in a pilot.

Numbers were also bleak at the Gap, with sales falling to $4.4 billion in the quarter, from $4.6 billion a year ago, and net income dropping to $214 million, from $319 million in the same period a year ago. Comparable store sales fell 7%, with a 10% decline at Banana Republic, 6% dip at the Gap, and a flat performance from Old Navy.