BelVita Promotes 'Steady Energy' For All (Including Fitness Buffs) 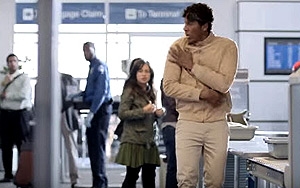 The brand first debuted the “steady energy” concept with a quirky online video campaign in which an American businessman — fortified with the long-lasting energy supplied by eating his morning BelVita biscuit —g oes about the office affecting a fake British accent.

Nearly simultaneously, the brand also began releasing six new 15-second mainstream-market videos — starting with one of two (“Doors” and “Type ABC”) that are being aired as U.S. TV spots. Another (“Hot Guy”) has a Hispanic version that is also airing as a U.S. TV ad; and “Type ABC” has a Canadian version for use as a TV ad in that market.

As of Feb. 22, all six mainstream-market videos are also on digital and social media channels (all are posted on the brand’s YouTube channel.)

Each video includes three different vignettes showing different ways that people behave in the same situation—with the third one offering a surprising twist. All end with the tagline: “BelVita: Because we can all use steady morning energy.”

For instance, “Travelers,” set in an airport, shows a businesswoman who’s clearly a pro at going through security, a young woman who’s clearly flustered by it, and a guy who suddenly materializes out of nowhere (shown above). Voiceover: “BelVita Breakfast Biscuits provide steady morning energy whether you’re a savvy traveler, a first-time traveler, or a first-time time traveler.”

"We know that our consumers are constantly on-the-go--whether it’s to the gym, or just getting ready to look like they've been to the gym," said Jason Levine, VP of marketing, biscuits for BelVita parent company Mondelez International.

The video set in a gym, “Play It Cool” (see below), ties in with another component of the campaign.

Starting Feb. 29, BelVita will be distributing more than 5 million biscuit samples and custom content to morning gym-goers at more than 2,500 gyms across the U.S. and Canada, through a partnership with Zoom Active Lifestyle Marketing, BelVita tells Marketing Daily.

“Gym cool” commercials with sound, as well as custom no-audio “Steady Morning Energy” digital spots, will play on screens in the gyms. Branded free-standing banners and mirror clings will be on display throughout the gyms.

In addition, BelVita will sponsor morning workout classes at some LA Fitness and 24 Hour Fitness locations during the four-week gym partnership.