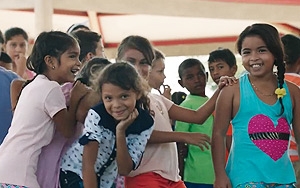 Seven years ago, AT&T helped introduce the world to Toms, a company known for its “buy-one, give-one” policy of donating a pair of shoes to children in underdeveloped countries for every pair bought.

The spot featured the fledgling business’s founder (and “chief shoe giver”) Blake Mycoskie running his small business from the road, traveling about 300 days a year, and doing much of his business on his cell phone through AT&T’s network, while explaining his business and its mission.

This year, AT&T and Mycoskie will team up once again for a commercial running on this year’s Academy Awards telecast, this time showcasing the company’s global reach, and AT&T’s connection to keeping it running.

“Blake has used the AT&T network to grow his company, connections and the movement around the globe,” Jena Atchison, director of brand advertising for AT&T, tells Marketing Daily. “The [commercial] is inspired by the day-to-day giving that Toms does with the help of AT&T’s global network.”

The spot, from BBDO Atlanta and New York, depicts Mycoskie sending new shoe designs from far-away locations, conducting video calls from warehouses and giving away shoes to needy children around the world. “Toms started small, but now we’ve given more than 50 million shoes to children in need,” Mycoskie says in a voiceover. The ad is part of AT&T’s recently launched “Your Network” campaign, which demonstrates how AT&T’s tools help people stay close to the things important to them, Atchison says.

“We followed Blake in his daily operations of Toms -- from shoe inspiration to communicating with his team and giving to those in need,” Atchison says. “AT&T is excited that our relationship allows us to collaborate to make the world a better, more connected place.”

The ad (which will be one of several AT&T will be running on the Oscars telecast) also celebrates Toms’ 10-year anniversary this year, that will also include several activations from AT&T throughout the year, beginning with beginning with a “Red Carpet Alpargata” shoe designed especially for the Oscars, that will be given away to attendees at InStyle magazine’s viewing party. AT&T is also hosting a Twitter sweepstakes for two fans to win a pair of shoes as well.