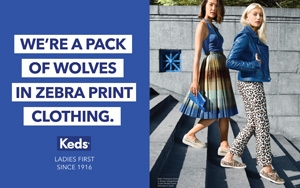 Keds is celebrating its 100th anniversary with a campaign that champions female empowerment with a new roster of tastemakers, including actress Allison Williams, singer Ciara, and musician Tori Kelly.

Developed by agency KBS, the Keds Collective Spring 2016 ad campaign will feature these famous faces modeling new product offerings alongside messages such as, "We'll disarm you with our beauty, brains, and whimsical prints." Williams will also serve as creative director and star in two video shorts, titled "Woman's Touch" and "Uncharted Territory." Ciara will collaborate on a signature shoe design that will be available at retail.

In the U.S., Ladies First will run on digital networks, specifically Refinery29, in Cosmo and Glamour magazines, and via out-of-home in NY and Los Angeles. In additional to digital and print ads, the campaign will include event activations and social media outreach.

Keds and KBS first established 'Ladies First Since 1916' last fall. "It’s a platform that not only honors the brand’s long standing dedication to female empowerment, but Ladies First rejects antiquated conformist ‘rules’ in favor of a new perspective that celebrates both femininity and strength," says the agency.

Although longtime brand ambassador Taylor Swift isn't specifically showcased in this initiative, Keds executives say she remains a member of the "Keds team" given her long-standing partnership with the brand.