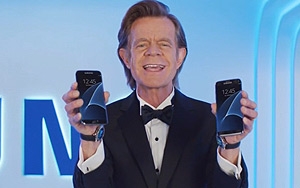 Samsung scored a 883% “penetration per thousand” (PPM) index, according to 4C Insights.

The PPM measure answers the question: “Among people who engage in the Oscars on social media, how much more likely are they to engage with a given advertiser compared to a set of more than 30 Oscar advertisers and competitors.”

Netflix is the exception -- and looks to have scored the biggest bang for its buck in terms of social-media engagement from TV advertising spend: Buying just one 30-second commercial for $1.9 million.