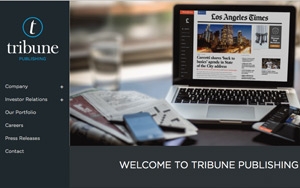 Just a week after the former CEO was pushed out, Tribune revealed a major shakeup in the organizational structure for its newspapers, combining the roles of editor-in-chief and publisher at newspapers, including the flagship Chicago Tribune, Los Angeles Times, The San Diego Union-Tribune and The Baltimore Sun, among others.

At the Chicago Tribune, Bruce Dold -- who took over as editor in chief from Gerould Kern last month -- is assuming the role of publisher, replacing Tony Hunter, who was promoted to Tribune’s president of national revenue and strategic initiatives.

At the Baltimore Sun, Editor Trif Alatzas has been elevated to the new dual executive role, replacing Richard Daniels in the publisher spot. At the South Florida Sun Sentinel, editor Howard Saltz is also taking over as publisher, filling the spot left vacant by former CEO and Howard Greenberg, who retired in December.

In addition, Malcolm CasSelle was named president of new ventures, with a focus on technology and digital expansion. Denise Warren, a former New York Times Co. executive who joined Tribune in May as president of digital and boss of its East Coast newspapers, is leaving the company. On the digital side, the LAT is acquiring LA.com and launching a new Web site focused on the city.

The changes were announced by CEO Justin Dearborn, who stated: “By giving our newsroom leaders dual responsibilities, we are ensuring our local brands remain vital to the communities they serve with our journalists and creators producing premium, compelling content across all mediums.”

Dearborn replaced former CEO Jack Griffin last week. The appointment was a surprise move engineered by Michael Ferro, a technology investor who’d been brought on by Griffin as a partner just a month before. Ferro, who previously owned a majority stake in Chicago Tribune rival the Chicago Sun-Times, invested $44 million in Tribune in February, making him the company’s largest individual shareholder, which earned him a position as non-executive chairman.

In addition to the organizational changes, Tribune announced that Ferro has donated his stake in Wrapports, the company which publishes the Chicago Sun-Times, to a charitable trust.