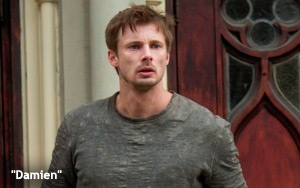 A&E’s “Bates Motel” and now its new companion series “Damien” might have you wondering what other old movies might be mined for prequel or sequel treatment in the form of a TV series.

A couple of ideas, free of charge, from movies out of the 1970s -- the same era as “The Omen” (1976), the movie that inspired this new “Damien” series: “The Exorcist: Regan’s Daughter,” “Son of Taxi Driver” (or maybe just “Uber Driver”) and “Animal House: Legacy” (how much do you want to bet someone will actually do this one?).

Now TV’s doing it again with “Damien,” this new A&E series premiering Monday in which the scary son of Gregory Peck and Lee Remick in the original movie is now 30 years-old in what seems like the present day (yes, the arithmetic doesn’t work, but it’s a minor detail). And it should be noted right here and now that the grown-up Damien Thorn is played in the TV show by an actor named Bradley James (pictured above). The child actor who played the little boy in the original film was named Harvey Stephens. He was 6 when the movie was released, and now he’s 45.

And so, you have a kind of theme night unfolding on A&E. “Bates Motel” is already well-established -- popular enough apparently to continue into this new fourth season (and emerging as the longest-running original drama series A&E has ever produced).

Will “Damien” have the same good fortune? That’s an open question whose answer won’t likely be found in the book of Revelation -- which is, of course, the source material for all of these Satanic, end-of-the-world story lines.

In the premiere episode of “Damien,” this young man named Damien is just now finding out that there’s something different about him. Apparently, he doesn’t quite remember key events from his very early life -- events known to all who revere the original “Omen” movie and remember the highlights of the young Damien’s early upbringing all too well.

Most notably, people who were brought into Damien’s orbit in the original movie had a way of dying horribly -- such as the decapitation of the photographer Keith Jennings (David Warner) by a sliding pane of plate glass, and the suicide of Damien’s nanny.

This is one of the best-remembered scenes in the original movie -- the nanny, evidently possessed by demons, standing on the ledge of the Thorn mansion and declaring, “It’s all for you, Damien!” before jumping and hanging herself while parents and children attending Damien’s birthday party watched in horror.

This scene is replayed in full in the premiere episode of “Damien,” which references the old movie often -- so much so that it seems clear that obtaining the rights to use pieces of the original film must have been a key factor in A&E’s decision to go ahead and produce this series. The flashbacks make for an interesting dimension we haven’t seen before in a TV show. Flashbacks on TV shows are relatively common, but flashbacks featuring Gregory Peck and Lee Remick are not.

Those viewers who are familiar with the old movie will welcome the backward references to it. For them, the flashbacks give the modern-day story of Damien a frame of reference, although that frame is a little shaky at times. For one thing, I wondered what had happened to Damien between the time his father (Peck) was killed at the end of “The Omen” and the present day. Why didn’t he know or learn earlier that there was something “special” about him? Or more to the point, did the horrible deaths of people around him simply cease for 25 years?

In the new show, however, the dying starts anew, and “Damien” is off and running.