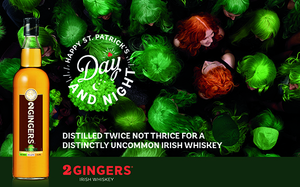 Just in time for St. Patrick's Day, Beam Suntory's 2 Gingers Irish Whiskey is launching its first creative under its new agency VSA Partners.  Beam acquired the brand in 2012 and this is its first big marketing campaign.

The concept is designed to invoke the "fiery, adventurous spirit" of 2 Gingers' founder's red-haired mother and aunt - the namesakes of the brand.

The Big Ginger ad, for instance, provides a recipe and shows two red-haired models attempting to fit into a small-sized room, playing off the "big" wordplay. The Old Fashioned ad features these two models riding an old-school penny-farthing bike.

The campaign appears in print, outdoor, social, retail and in bars.

“The whiskey world can be a pretty serious, stuffy place, with lots of old stories and leather armchairs," says Bob Winter, Partner, Executive Creative Director at VSA Partners. "So we thought Mary and Delia, the namesakes of 2 Gingers, could bring a little fresh air.  Their spirit inspired the whole campaign, with its provocative visuals and new twists on familiar cocktails.”

Beam appears to be happy with VSA. After the Chicago-based agency landed the 2 Gingers account in October, Beam then named the agency AOR for its Hornitos tequila brand.