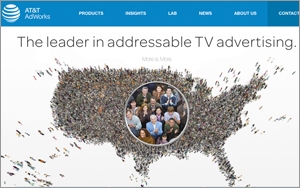 The TV Blueprint inventory contains premium linear TV inventory -- across all 210 national DMA markets -- in 26 million DirecTV and U-verse TV households. VIP will be available to advertisers starting in the third quarter of this year.

AT&T says the difference here is transparency, as well as the ability to target networks and dayparts. That's something not all linear programmatic TV platforms are offering.

DirecTV and U-Verse have access to 75 cable advertising networks, where it retains on roughly, two minutes per hour of advertising inventory. Brown says with VIP there will be transparency “on the front end and on the back end.”

AT&T says the longer term plan is for VIP to be private marketplace -- which will include multiple advertising avails -- including addressable and digital inventory.  There are over 200 demographic and behavioral data segments built into its VIP system; AT&T’s system can incorporate a marketer’s first party data into a company’s media planning.

Brown says marketers using its system can gain deep insight -- across its large DirecTV and U-verse set top box universe: “We become an analytics engine based off of 32 million set boxes with granular viewing behavior they can apply for their segmentation strategy.”

The AdWorks’ TV Blueprint system started up in 2014, for just its fiber-based pay TV service, U-Verse, now in 6 million homes. In July 2015, AT&T closed its deal to acquire DirecTV for $49 billion. AT&T says it will look for an initial advertising client or media agency as a beta test partner; then look to run campaigns in the coming months.

AT&T says there are over 200 demographic and behavioral data segments are built into its VIP system; VIP can incorporate a marketer’s first party data into its media planning.