'Downton Abbey' Finale Was A Miracle Of Storytelling 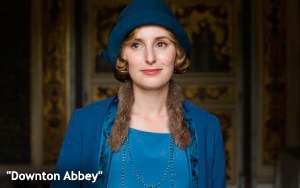 Spoiler alert: This blog reveals just about everything that happened on the “Downton Abbey” series finale that aired last night.

It all came together so nicely, and with so many happy endings, that it was easy to overlook the one character’s storyline that ended sadly on the final episode of “Downton Abbey” Sunday night.

The episode was one hour and 40 minutes long -- an extra-long time frame that seemed necessary for tying up the story lines for so many characters. Most notable about the episode was the way the show paired up so many of the characters before the curtain came down.

Chief among these, of course, were Lady Edith (pictured above) and her suitor Bertie who returned to Edith to propose to her again after jilting her in the penultimate episode two weeks ago when he learned about her illegitimate daughter Marigold.

With all of its many attributes, “Downton Abbey” was never necessarily noted for its suspense, but Bertie and Edith’s wedding ceremony was the closest the show ever came to being a nail-biter as viewers held their breath waiting for something or someone to come along to derail Edith at the altar. Incredibly, the writers of “Downton Abbey” gave her a pass this time. Miracle of miracles, Edith found happiness.

Other couplings on the “Downton” finale included Isobel Crawley and Lord Merton, who Isobel rescued from the clutches of Lord Merton’s son Larry and daughter-in-law Amelia -- with help from the Dowager Countess, Lady Violet. Lord Merton got a happy ending on two fronts: He finally won Isobel’s heart, and then learned that the fatal disease he had been told would finish him off in a few months had been misdiagnosed.

Assistant cook Daisy finally fell for the footman Andy. Daisy also decided to move to her father-in-law Mr. Mason’s farm. Mr. Mason then seemed to grow closer to the head cook, Mrs. Patmore. Mr. Molesley, the other footman turned-school teacher, received an offer to teach full time and resigned from service at Downton Abbey. Miss Baxter, lady’s maid to Cora, countess of Grantham, promised Molesley they would continue to see each other.

Rounding out the couplings was Tom Branson, the Crawley brother-in-law and former chauffeur, and Laura Edmunds, editor of Lady Edith’s magazine. These two seemed to bond at Edith and Bertie’s wedding.

Lady Mary’s new husband quit motor racing and opened up a car dealership with Tom. Robert, Earl of Grantham, became frustrated by wife Cora’s commitment to her new position as president of the local hospital. Then he witnessed her in action at a community meeting and developed a new level of love and respect for her.

Lady Rose and husband Atticus came from New York for Edith’s wedding. They had a three-month-old child (who they left in New York in the care of a nanny).

Under-butler Thomas Barrow finally found a new job on a sleepy nearby estate occupied by an elderly couple and just two other servants. Barrow soon became bored but he soldiered on.

No one died in the series finale of “Downton Abbey,” but the one character who was hit with bad news was one of the show’s most beloved -- the stalwart butler Mr. Carson, who developed a condition that may have been Parkinson’s disease (though this was not specified).

It soon became evident that Carson could no longer carry out his duties and he agreed to retire on the estate, presumably to be cared for in his old age by his wife, Mrs. Hughes. Barrow was then hired back to be head butler at Downton.

Carson’s retirement and Barrow’s rehiring both took place on New Year’s Eve in the aftermath of Edith’s wedding earlier that day. And that wasn’t all that happened on this action-packed day: Lady’s maid Anna and valet Mr. Bates delivered their baby son in Lady Mary’s bedroom as the household celebrated the New Year and Edith and Bertie were being cheered by well-wishers as they left the house.

Some might criticize the multiple happy endings engineered for the “Downton” characters in the final episode as corny or unbelievable. But these characters were beloved, and in previous seasons, the show had already brought us the shocking deaths of at least two characters who no one would ever have predicted would be killed off – Mary’s first husband, Matthew, and sister Lady Sybil.

Killing off another character in the final episode would have deadened the whole show. Instead, for all of the beloved characters who had survived so many trials and tribulations up until the end of the show, the “Downton Abbey” writers chose life. For us, however, they’re gone. Whatever will we do without them?