'Of Kings And Prophets' On ABC: A Mystery Of Biblical Proportions 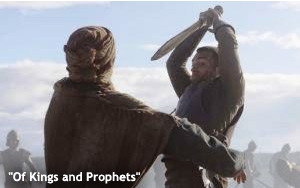 Mysteries abound all around us, and none more so than the mystery of how some television shows make it on the air.

Take this new drama series of the ancient world called “Of Kings and Prophets,” which finally premieres on ABC on Tuesday night (March 8). It was formerly scheduled to start last fall, but was shelved until now.

Why launch this show now? There’s nothing particularly timely about the show’s subject matter -- which has to do with the reign of King Saul 1,000 years before the birth of Christ (or so says a time-period identifier that appears on screen at the beginning of the premiere episode).

Saul (played by British actor Ray Winstone, who’s kind of a modern-day Peter Ustinov) is one of the “Kings” and Samuel (Israeli actor Mohammed Bakri) is the principal prophet seen in the premiere.

The show has to do with the rivalry between these two. Apparently, an Israelite king in ancient Palestine was a pretty powerful guy, but he was expected to acquiesce to the advice and counsel of the prophet, who was believed to be the Lord’s representative on Earth. Are you following this so far? So, let’s say King Saul decides to act in defiance of what Samuel decrees in the name of the Lord. What happens then? According to this TV show, conflict ensues.

So that’s the show: A king clashes with a prophet in the desert sands of ancient Palestine. If I were a TV programming executive, this is not exactly an elevator pitch I would have followed up on after stepping out of the elevator, but TV programming executives presumably have better instincts than I do when it comes to this stuff.

Still, I have to ask: What is this ancient-world drama doing on prime-time network TV? For one thing, it would seem to have nothing in common with its lead-in on Tuesday nights -- the fanciful “Marvel’s Agents of S.H.I.E.L.D.” -- that would compel viewers to stick around for it after “Agents of S.H.I.E.L.D.” has ended.

Adding to the mystery of “Of Kings and Prophets”: There’s nothing on the air like it on ABC or any other network. And please don’t believe what you’re reading when you come across some other columnists and critics referring to “Of Kings and Prophets” as a network-TV version of “Game of Thrones.” The fact is, they have nothing in common.

It’s even misleading to refer to “Of Kings and Prophets” as a “biblical” drama, despite the presence of Old Testament superstars such as Saul, Samuel and David. I’m no expert on the Old Testament, but I have a hunch the story lines in this show at best adhere very loosely to the original text. In addition, when you label something as “biblical,” isn’t that supposed to imply that the story will encompass spiritual and religious concerns too?

In the premiere episode of “Of Kings and Prophets,” superstitions abound, but religion does not. Mostly, the show is about tribes making war on each other, and various couples stealing away down dark passageways to even-darker rooms to have steamy sex. As a matter of fact, the darkness that shrouds this show’s interior scenes -- evidently an attempt at reproducing the “real” lack of light in the interior spaces of the ancient world -- make much of this show unwatchable.

Outdoors, however, the battle scenes are chock full of blood and guts, the result of close fighting with broad swords and clanking shields. Every plunge and slash of a broad blade into someone’s torso comes with the kinds of squishy sound effects that are so common today in TV shows and movies of this type (from “Rome” on HBO to the movie “300” about the Battle of Thermopylae).

The action scenes are not enough to draw and keep an audience, however, since such sequences have been done so often, and better, elsewhere. So what does “Of Kings and Prophets” have to offer? That’s the mystery of this show. It has no educational or religious value. And as entertainment, it’s run-of-the-mill, at best.

There is one thing to look forward to, although heaven knows when this will occur: The face-off between David, who is introduced in the premiere as a brash, handsome young shepherd, and the “giant” Goliath, an oversized Philistine warrior who is also seen in the premiere.

In the premiere, David gets a chance to demonstrate his proficiency with a slingshot when he slays a lion with one shot. Let’s see Bart Simpson top that.

“Of Kings and Prophets” premieres Tuesday (March 8) at 10 p.m. Eastern on ABC.