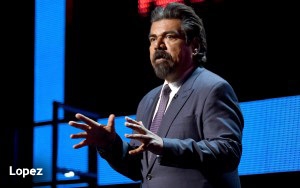 A group of seemingly disparate Viacom cable networks came together for two days of upfront presentations in New York whose goal was, in part, to demonstrate what these networks have in common and why they have all been organized under one umbrella known as the Viacom Kids and Family Group.

But the other member of Viacom’s Kids and Family Group -- Nickelodeon, which had its own upfront a day earlier and just a few blocks away -- was also mentioned prominently in the opening remarks. They were delivered Thursday by the tireless Cyma Zarghami, president of the Kids and Family Group of Viacom networks, who was also the lead presenter at Nickelodeon’s upfront the day before.

What ties these networks together? A focus on family and adults of Millennial age, even on Nickelodeon, Zarghami said. “We’re building our future by listening to and being inspired by bigger and broader families,” she noted of CMT.

“TV Land is getting younger,” she told the audience of ad reps. “It is attracting Gen x-ers and Millennials [who] seem to be excited about our incredibly impressive new slate of content.”

“Nick at Nite,” she said, “is for adults who are re-experiencing shows from their childhood” -- basically the 1990s with repeats of “George Lopez,” “Full House,” “Friends” and “The Fresh Prince of Bel-Air.”

Even Nickelodeon is attracting family-oriented adults, Zarghami said. “As [Nickelodeon] has grown into our 30s [the network is 34 years old], we also have an undeniable relationship with adults,” she said. “We have a large and growing adult audience on Nickelodeon as parents watch our family content with their kids.”

The point seemed to be that the Viacom Kids and Family Group is the place to go for advertisers seeking to reach young families comprising Millennial adults and young children.

The good news for the Viacom Kids and Family Group, especially where Thursday’s upfront was concerned, is that TV Land and CMT have a positive story to tell about where they’re both headed in the development of new original series. Both promoted their existing series, announced new ones and brought plenty of talent on stage.

In fact, the most electrifying moment of this upfront was a live performance put on by cast members of CMT’s upcoming, Memphis-based scripted-drama series “Million Dollar Quartet,” inspired by the musical of the same name. It's about the mid-1950s rock ‘n’ roll scene centered on Sam Phillips’ Sun Studios.

Onstage in Rose Hall, the band featured performances by Elvis Presley, Johnny Cash and Jerry Lee Lewis impersonators, who were all discovered in and around Memphis and cast in the show. They brought the house down. The show is due to premiere in November.

CMT also announced another new scripted show, “Still the King,” a comedy starring Billy Ray Cyrus as a washed-up former country star. The trailer for this one seemed as promising as “Million Dollar Quartet.” The network announced a non-scripted show too -- “Dude Perfect” – featuring the group of the same name consisting of five men whose outrageous stunts have made them a YouTube sensation. This show is from producer Rob Dyrdek, who a day earlier had introduced two new shows he is producing for Nickelodeon.

Separately, TV Land announced one new scripted comedy series and pilots for three more that would join the network’s fledgling, but much talked-about lineup of comedies already on the air: “Younger,” “The Jim Gaffigan Show” and “Teachers.” All will be back for new seasons later this year and next year.

“In just one year, we have transformed TV Land,” said Keith Cox, TV Land’s EVP of development and original programming.

The success of TV Land’s comedies has apparently helped the network draw top talent to develop more shows. At the upfront, Cox confirmed that TV Land has made an overall development deal with producer Darren Star, showrunner on “Younger.” And a new comedy from George Lopez (pictured at the event, above) -- titled simply “Lopez” -- will be TV Land’s one new comedy launch this year.

In the works are pilots for a sitcom adaptation of “The First Wives Club,” a sitcom based on the life of Kyle Richards from “The Real Housewives of Beverly Hills,” and a pilot called “Nobodies,” for which Melissa McCarthy is an executive producer.

While it wasn’t easy to top the performance of the “Million Dollar Quartet” earlier in this upfront show, Viacom took a shot at it with a closing performance by Cyndi Lauper, who has a country album coming out called “Detour.” She sang a song, “Misty Blue,” from the album, and then closed with “Girls Just Want to Have Fun,” a performance which also can be counted as one of the great moments of this year’s upfront season, which has only just begun.