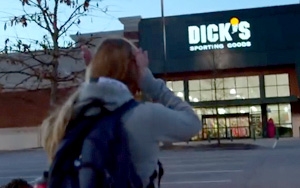 Struggling with a sales decline, Dick’s Sporting Goods is getting ready for Olympic fever, with a new ad campaign that follows the pain, sweat and ambition of a handful of hopefuls.

Called “The Contenders,” the campaign tracks the lonely and difficult paths of five athletes who also work at Dick’s, in an employment program that is part of its sponsorship of Team USA.

“We want to celebrate and support the grit and determination of these athletes,” says Lauren Hobart, CMO and EVP of the Pittsburgh-based retailer. “This allows them to focus on their training — and not how they are going to put food on the table or pay next month’s rent. At the same time, our customers benefit from the incredible knowledge and experience that the contenders bring to our stores.”

She tells Marketing Daily that the spots, created by Anomaly, are airing on ESPN, ESPN 2, CBS, NBC and ABC, and that the campaign includes significant digital and social media components.

“The beauty of the Olympic and Paralympic Games is that they appeal to everyone, and are one of the few -- if not the only -- live, mass audience sports events that appeals equally to men and women. And these athletes compete for all the right reasons -- not fame, not fortune, but rather the pride of representing their country and being the best.”

She says that emphasizing the rough road to Rio is more important than whether any of these spotlight athletes actually bring home a medal. “We started this initiative because we saw a lack of awareness for the struggle to balance the hard work, sacrifice and dedication it takes to become an Olympian while also trying to hold a traditional job,” she says. So rather than focus on legends, “we think these Olympic and Paralympic Contenders who sacrifice everything financially, emotionally and physically for one moment every four years are the true heroes. These are the athletes we wanted to celebrate.”

Dick’s employs some 200 Olympic hopefuls, in 32 different sports, and intends to donate $1,000 to youth sports for every medal Team USA brings home. And it has set up a dedicated Web site to showcase the content and athlete backstories, as well as results of the games once they begin in August. That includes a documentary about Kerri Walsh Jennings, pursuing her fourth gold medal.