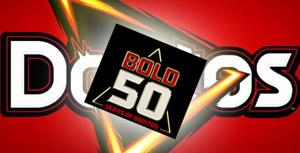 Following its final “Crash the Super Bowl” and the launch of its new “Crash the Second Screen” contest at this year’s big game, Doritos is focused on generating buzz and engagement for the brand’s 50th anniversary.

The first initiative, dubbed “Bold 50,” is a revival (or “continuation,” in Doritos’ words) of the “For the Bold” campaign it launched in 2013.

The program is challenging fans to participate in setting 50 world records over the course of 2016.

Fans are being encouraged to register at DoritosBold50.com to receive news about the upcoming record-setting efforts, and how they can try to participate — and win cash in the process.

All records will be verified by RecordSetter.com, the Las Vegas-based world record organization.

The first record was set on Feb. 7, when 22 people participated in the "Tallest Suspended Football Party" (see video below). Doritos fans were served game-party fare as they were suspended by a crane more than 13 stories above Levi's Stadium, the Santa Clara, California, home of the 49ers.

The campaign continues Doritos’ tradition of empowering fans to “seize the moment,” said Jeannie Cho, VP, Frito-Lay marketing, in announcing the campaign. Cho cited the brand’s letting fans control its Doritos BoldStage at SXSW with their tweets, as well as “Crash the Super Bowl.”

Examples of other records that “could” (according to Doritos) be broken include: highest location to eat Doritos chips; tallest house of cards built using Doritos; and farthest Doritos chips tossed in mouth.