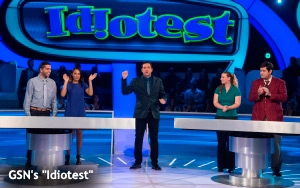 Game Show Network’s upfront presentation Tuesday morning in Manhattan lived up to the position the network has crafted for itself: fun and funny.

Citing steady audience growth over the last few years, GSN officials boldly vowed to stay the course and continue with the strategy they say is responsible for the network’s growth -- creating original series in two categories, contemporary game shows and skill-based competitions.

“We’re going to continue to make shows that are really defined by being fun, funny and even a bit uplifting and inspiring, because that’s what GSN is about. So I am proud to announce that we are going to be doing more of the same,” said President/CEO David Goldhill in his opening remarks.

“The commitment we’ve made for expanding original programming that we’ve talked about over the past few years has really achieved exactly what we promised it would.” Goldhill told his audience.

“The best way to understand our network is for me to do what I’m personally best at, which is boring repetition,” Goldhill said. “Last year was the most-watched year in GSN’s history. That is the fourth year in a row that I have made that statement. And that’s really the most important thing about our network. In prime time, which is where we program our originals, we have double-digit growth across all key demos. … Our little niche television network is now a top 30 television network.”

Much of the GSN presentation was given over to announcing renewals of its existing originals -- including the game shows “Idiotest,” “Hellevator” and “Skin Wars,” its first skill-based competition show.

“Winsanity,” GSN’s other new show, will test contestants’ knowledge of pop culture. Clips shown at the upfront indicated that this show will be adept at incorporating brands of all types into the show both in the context of questions and in the wide array of prizes the show will be awarding its winning contestants.

GSN also announced it is producing pilots for two more prospective series -- “Breaking App,” a competition series for app designers; and “The Investigation,” described as a crime-based game show.

Also in development is “Glass Wars,” another skill-based competition show -- this time featuring artisans in glass-blowing.