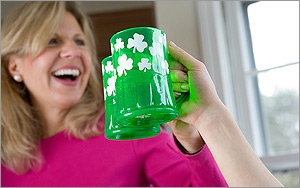 With St. Patrick’s Day just around the corner, retailers are eager to win over any Shamrock spending that comes their way, whether that includes the 82% person of Americans who’ll wear green that day, or the millions who’ll likely engage in drunk shopping.

The National Retail Federation says St. Paddy’s revelers are likely to inject $4.4 billion into the economy, with some 125 million observing the holiday. Its study, conducted by Prosper Insights and Analytics and based on more than 7,100 consumers, predicts an average of $35.37 per celebrant, down a bit from last year’s $36.52.

That leads us to the drunk shopping data from Finder.com, released just in time for the green beer-fueled St. Patrick’s Day, which reports that when it comes to shopping-while-sloshed, shoes are the No. 1 purchase, overall, as well as the top buy of woozy women. Men are more likely to gamble. Cigarettes come in No. 2 for both genders. (It’s worth noting that the holiday accounts for 1% of annual beer sales, and is typically one of the deadliest driving days, with 40% of all crash fatalities that day involving drunk drivers. And we mean really drunk: A government study found that in 75% of accidents involving fatalities that day, drivers were two times over the legal limit.)

Based on responses from 3,000 people, Finder says Millennials are the most likely to engage in buzzed buying, and spend about 75% more than Gen Xers and 40% more than Boomers when they do.

As far as the best places to watch the cabbage-fueled carnage, WalletHub ranks Boston as the No. 1, based on a formula balancing traditions, cost, weather, safety and accessibility, followed by Buffalo, Omaha, Philadelphia and Pittsburgh. (It says Pittsburgh, Boston and Omaha have the highest density of people with Irish descent.)