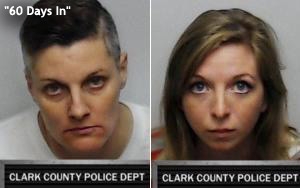 They’re not criminals, but they’re playing them on TV. The question is: Why?

It’s the latest twist in situation-reality shows (since I have never heard this term before, I am taking credit for making it up, pending any evidence to the contrary). For this new A&E show called “60 Days In” – premiering Thursday night (March 10) -- seven ordinary people, all non-criminals, have volunteered to enter a county jail in Indiana as undercover operatives assigned to report back to local authorities about what they observe there.

So another question might be: Why did the sheriff’s department recruit these amateurs for this potentially dangerous task? Couldn’t they find any experienced law-enforcement personnel better qualified for this kind of undercover work?

If this is explained in the series premiere, then I missed it while watching the episode earlier this week. Also unclear were the motivations for these volunteers to undertake these faux 60-day jail terms. Some of them offered various explanations. One woman -- a 25-year-old, self-described stay-at-home mom with two small children (Barbara, pictured above right) -- indicates that she is concerned about the criminal justice system, which she apparently feels coddles inmates with basically the same food and health services as her own husband enjoys in the military.

But there’s nothing about her background that would suggest she is at all prepared for a two-month hitch behind bars at Clark County Correctional Jail in Jeffersonville, Ind. Instead, she seems cast in this seven-member group of volunteers as someone who might be easily victimized by the inmates she’s thrown in with.

Another volunteer, Maryum Ali -- an inner-city social worker who happens to be one of the daughters of Muhammad Ali – says she hopes to learn more about inner-city street culture. Another woman -- Tami (pictured above left) -- is already a cop and seeks to better understand the people she encounters on the wrong side of the law while doing her job. And so on.

But these reasons for entering this program -- which takes all of these people away from home and family for two months -- seem to pale when juxtaposed in the show with the reality of this jailhouse, which is portrayed as one of the roughest such places of its kind this side of “Lockup” on MSNBC. With this in mind, the show is positioned as a kind of “Jail Survivor,” in which these clueless volunteers are about to experience a series of very rude awakenings.

In fact, the chaos in this jailhouse is the underlying reason given to explain why the Clark County sheriff’s department devised this undercover scheme in the first place. Apparently, this facility is notorious for its violence and drug-trafficking. Since the sheriff’s department suspects corrupt staff members of participating in the smuggling of contraband, the department wants its wide-eyed volunteers to collect the intel the sheriff needs to clean up this mess.

In the premiere episode, we meet the volunteers, learn about their lives, and witness them being trained by a corrections expert who advises them to maintain a low profile when they’re inside.

And yet, here’s a reality-TV paradox: Camera crews will be following these new fish around inside the facility, which might make it difficult for them to stay under the radar. The guards and inmates are supposed to buy the explanation that the cameras are there to film a documentary about new inmates.

Maybe they’ll accept this, or maybe they won’t. My own experience from watching a ton of prison shows on TV (especially the aforementioned “Lockup” on MSNBC) is that jailhouse residents have a sixth sense when it comes to detecting snitches in their midst. Based on the evidence provided in the premiere episode of “60 Days In,” it seems doubtful these volunteers can effectively “act” the part of inmates so well that they’ll fit in and somehow avoid conflict.

Of course, if they evaded conflicts with this jail’s inmates, you wouldn’t have a very compelling TV show since the potential for conflict is the biggest reason for watching this show. As it happens, the first episode of “60 Days In” -- one of two A&E is airing back-to-back on premiere night -- is the set-up show in which the volunteers are not seen entering the jailhouse at all until the very end. Episode Two, which was not provided for preview, is apparently where the you-know-what hits the fan.

tv
1 comment about "New 'Situation-Reality' Show On A&E Has Innocent People Volunteering For Jail".
Check to receive email when comments are posted.
Next story loading