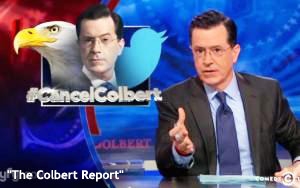 “The Internet Ruined My Life” is a very provocative TV show, starting with its title. This show -- consisting, at the moment, of just six half-hour episodes -- premiered Wednesday night (March 9) on Syfy, but it’s not science fiction.

In fact, it’s not fiction at all. The show purports to tell the true stories of people whose lives were turned upside-down in the aftermath of things they posted on social media.

Let me say that again: Things they posted on social media. That’s the thing that first struck me about the show’s title “The Internet Ruined My Life.” Or to put it another way: “The Internet did it -- not me. It’s the Internet’s fault I got in trouble. What I posted had nothing to do with it.”

In other words, the responsibility for the ruination of these “victims” (as the show refers to them) is transferred completely to the Internet, even though the Internet is, after all, merely a dumb (as in, non-thinking) conduit for the messages these victims composed and then posted. Isn’t that like blaming your phone when you receive nuisance calls from telemarketers?

In the actual stories in this show, however, nuances abound. In the first episode that aired Wednesday, for example, the first of two stories had to do with a young woman named Suey Park, a Korean-American and a self-described activist/watchdog who reacts quickly to situations that she thinks represent discrimination of, or insults to Asian-Americans.

True to form, her reactions take the form of tweets posted on Twitter. For her generation, this seems to be the only way they know of expressing themselves -- say it in 140-characters or don’t say it at all.

Here’s what happened to her in 2013: She became the target of vicious tweets, lost long-time friends and was even threatened with death after she called for the cancellation of “The Colbert Report” with a hashtag she created called #CancelColbert (that’s Stephen Colbert commenting on the hashtag on his show on Comedy Central in the photo above).

Specifically, she reacted to one of Colbert’s bombastic pieces of satire in which he vowed to demonstrate his “sensitivity” to Asian-Americans. So he tweeted: “I am willing to show the #Asian community I care by introducing the Ching-Chong Ding-Dong Foundation for Sensitivity to Orientals or Whatever.”

Sensing an insult to Asian-Americans, Park tweeted: “The Ching-Chong Ding-Dong Foundation for Sensitivity to Orientals has decided to call for #CancelColbert. Trend it.”

Her tweet did “trend,” and in the days that followed, all of these terrible things happened to her. The death threat came in the form of either tweets or texts to her cell phone in which someone claimed to be a former military sniper and he happened to have his sights set on her right now (she was home in her bedroom in Chicago).

So she skipped town and went to hide among friends in New York. She claims she was tracked down there too by people angered by her call for Colbert’s cancellation. Some people must really love Colbert.

While it doesn’t excuse the reprehensible behavior of people who hide behind the anonymity of the Internet to threaten people with death, Park admits on “The Internet Ruined My Life” that she didn’t even mean what she wrote when she tweeted her call for Colbert’s cancellation, even though that’s what she wrote.

“I didn’t actually want the show to be cancelled,” she said, “but I was trying to think of something catchy and over-the-top to get my point across.” So this is what the Internet does (if you want to blame the Internet): It requires that one must exaggerate in order to make a point that will stand out amidst the din, even if the point being made is fundamentally dishonest and not at all what the writer meant or thought. Probably, the death threats were exaggerated for much the same reason, although one never knows about death threats.

If the first story in the premiere episode was a cautionary tale, the second story was just plain ridiculous. It was about a flamboyant young British man who was so excited about his upcoming trip to Hollywood -- his first visit to the U.S., a country he long dreamed about visiting -- that he tweeted to a friend: “Are you free this week for a gossip/prep, before I go destroy America? X [kiss].”

In this context, he was using the word “destroy” in the slangish way it is apparently applied in the U.K., meaning, basically, to have a rowdy time. Instead, the U.S. Department of Homeland Security picked up on his “destroy America” tweet, labeled him a terrorist threat, revoked this man’s visa, detained him in jail for about 24 hours upon his arrival at LAX, and then deported him straight back to England.

In this way, the Internet might not have destroyed this man’s life, but it did ruin his vacation. As for the officials of the Department of Homeland Security who misinterpreted his tweet, maybe they can star in a spinoff series called “The Internet Made Me Stupid.”

“The Internet Ruined My Life” airs Wednesday nights at 10 Eastern through April 13 on Syfy.