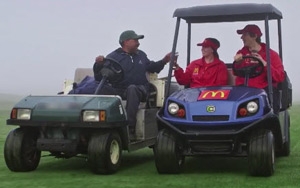 One spot (screen shot above) features workers at a golf course in Half Moon Bay. The other two feature commuters and others encountered near the trolley in San Francisco’s Marina District and two Oakland locations.

The TV ads were “a great way for our restaurant crew to engage with the community and brighten people’s mornings,” said Nick Vergis, one of the McDonald’s owners/operators in the Greater Bay Area McDonald’s Cooperative.

The campaign’s OOH efforts, including rotating-message digital LEDs and billboards, are customized by location (“Good Morning, Santa Clara,” “Good Morning, Daly City,” and so forth).

The campaign launched March 7 and runs through April 3.