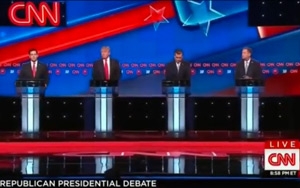 The poorest-performing Republican debate was on January 14 on the Fox Business Network, with 11.1 million viewers. Fox News Channel aired the first contest -- which registered the best TV ratings of any debate, Republican or Democratic -- scoring some 24 million viewers.

In 2016, the Republican debates averaged about 13 million viewers for seven debates -- nearly double what the Democrats averaged, at 6.82 million for five events.

For the most recent Fox News GOP debate, some $6.7 million in national TV advertising was spent on the three cable TV news networks on early-fringe, prime time, and late-fringe dayparts, according to iSpot.tv.