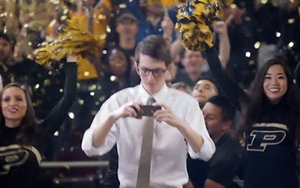 The season when worker productivity takes a dive on Thursday and Friday (particularly this weekend) is about to begin, and AT&T is looking to show off how it can bring fans closer to the action in any number of different ways.

A new television commercial, which will run during the tournament, is part of the company’s latest “Your Network” campaign that highlights how AT&T brings information and entertainment most important to consumers how, when and where they want it.

The spot, from agency BBDO, depicts a fan at a basketball game glued to his smartphone. He walks through the action — up the aisles, across court side, through the bands — without diverting his attention from the device. As he walks onto the court, the man is suddenly and abruptly tackled by a player, as the scene shifts to cubicle-filled office. “Thanks a lot, Dave,” the co-worker admonishes, as it’s revealed our fan has been watching the game from his office the whole time.

“Our 'Your Network' campaign is all about showing the ways AT&T connects you to what matters, and entertainment is part of that story,” Meredith Vincent, executive director advertising for AT&T, tells Marketing Daily. “More people every year are glued to their phone or tablet to watch the tournament.”

The effort also includes a digital element in which basketball commentator Kenny Smith explains that AT&T lets him stream DirecTV, “so I can watch the nail-biter in one city, right when I finish my broadcast in another.” That spot will be used in digital pre-roll. A social campaign also featuring Smith will include video content that details the great lengths fans will go to sneak a stream of their favorite team, Vincent says.

The new direction, highlighting the “Mobilizing Your World” platform, will likely mean the absence of AT&T’s “Legends” campaign, which had featured former college basketball stars kibitzing around a house as they watched the NCAA tournament.

“Never say never, but we are not running spots with the ‘Legends’ this year,” Vincent says. “We are very happy with how that campaign performed but the focus will be on 'Network of You' for this year’s tournament.”