Comedian No One Ever Heard Of Takes On Cosby, Gets Tons Of Attention 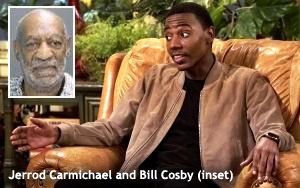 An NBC sitcom, in only the second episode of its new season, decides to take on Bill Cosby, who happens to be one of the most storied personalities in the history of the network.

What are we to make of this? Several conclusions come to mind. The first one is cynical, that this fledgling TV show (which had a short, six-episode first "season" last summer) decided to make the Cosby rape allegations the centerpiece of its storyline Sunday night in order to draw attention to itself at a critical time, when survival hangs in the balance.

So “The Carmichael Show,” starring a young African-American comedian named Jerrod Carmichael, had Carmichael's TV family debating the ethics of attending a Cosby stand-up performance. In the episode, which aired Sunday night, it was young Jerrod (who is 29 or 30 in real life -- the Internet does not reveal his birthday, for some reason) who bought the tickets to this Cosby concert.

He thought the tickets would make a nice surprise for his girlfriend Maxine (Amber Stevens West), but she refused to go. Their conversation went like this:

“I've loved ‘The Cosby Show’ since I was a kid, and I've never seen him live, and let's be honest -- this is kind of his farewell tour. Who knows how long he's going to be alive … or free!” Jerrod tells her.

To which she replies: “The ironic thing is you would have to knock me unconscious to get me to go see Bill Cosby!”

“So, I just want to confirm that's a 'no,' right?” Jerrod asks. “I wouldn't take you without your consent, Maxine!”

A few moments later, a line of dialogue written for Maxine literally convicted Cosby. It occurred when Jerrod's mother, Cynthia (Loretta Devine), was trying to decide whether she and Jerrod's father, Joe (David Alan Grier), should accept the tickets as a gift from Jerrod. “Well, Cynthia does not want to go and see a predator who took advantage of innocent women!” declared the outspoken Maxine on Cynthia's behalf.

Cosby has been accused by more than 50 women of drugging them and then taking sexual advantage of them in a string of incidents dating back to the 1960s. He was indicted for one of them in December, in Pennsylvania. He is out on bail pending a trial.

Another young African-American comedian, Hannibal Buress, 33, made a name for himself when he referred to Cosby as a rapist in his stand-up act. A video of one such performance in Philadelphia went viral in 2014, and Buress instantly became a lot more famous than he had been before. Carmichael is no doubt familiar with this. It may or may not be relevant, but he and Buress were both in the 2014 Seth Rogen movie called “Neighbors.”

Cut to the present day, and Jerrod Carmichael is adopting the same strategy. Not only did his show tackle the Cosby scandal, but Carmichael's p.r. handlers made him available to do a couple of interviews about Sunday's episode so that stories about the show would make a splash right after the episode aired, on Web sites such as Vulture.com and THR.com (The Hollywood Reporter).

The interviews were apparently conducted and then written in advance of the episode, since they were posted at 9:30 p.m. Eastern time on Sunday night, seemingly mere seconds after the show ended.

And yes, in order to preempt one of my readers from commenting here on the irony that I too am writing about this show on Monday morning and giving it even more attention, I hereby acknowledge that fact.

Of course, besides reacting cynically, one can give credit to the show for taking on an uncomfortable subject and giving it a fairly respectable airing. Among other things, the characters on the show got into various discussions about other celebrities involved in headline-making scandals -- from Michael Jackson to Woody Allen -- and debated whether or not they should still enjoy their work. “You need to separate people's personal life from their work,” Jerrod pleads of his family members at one point in the show. “Talent trumps morals,” he says.

And now, you've heard of Jerrod Carmichael when previously you may never have heard of him at all. Feel free to discuss.

tv
9 comments about "Comedian No One Ever Heard Of Takes On Cosby, Gets Tons Of Attention ".
Check to receive email when comments are posted.
Read more comments >
Next story loading