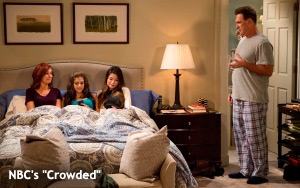 A new comedy series on NBC has me thinking of swearing off of network sitcoms for good.

I then get around to lamenting that there appears to be a crisis in network television comedy development. I also sometimes (if not always) then mention that some of the new, original sitcoms getting introduced lately on some of the cable networks are generally more imaginative -- and by implication, simply better -- than the sitcoms getting cranked out by the broadcast networks these days.

Well, before I bid sayonara to reviewing network sitcoms for a while, I might as well give this new one a going-over, since it’s the reason for this long, throat-clearing start to this TV blog. This show is called “Crowded,” and it premieres with two back-to-back episodes on NBC Tuesday night (March 15) starting at 10 Eastern (itself an odd time period for a network sitcom).

The one-word title “Crowded” is applied here to describe what the household in the show becomes after two grown children -- in this case, two young women in their early 20s -- move back home to live with Mom and Dad after they graduate from college and then find out life in the real world is not so easy.

So the house gets crowded. While four people living in what appears to be a sizable house might not really seem like such a big crowd, the presence of the two daughters hinders their parents from having sex all over the house -- an activity they apparently took to rather quickly after the two girls went away to school, and presumably young adulthood.

But now the parents’ sex life is greatly curtailed, about which they complain almost constantly through this show’s first two episodes (which NBC provided for preview). And we, the audience, are expected to give a rat’s patoot. But we don’t -- which is the same reaction so many people have to these kinds of TV comedies over and over and over again. And yet, for some reason, the networks keep churning them out.

One reason might have to do with ego. In the online press materials created by NBC to promote this show, there’s a “letter” to TV columnists from the creator of “Crowded,” a producer named Suzanne Martin.

In her letter, Ms. Martin reveals happily that this sitcom is based on -- guess what? -- her own life! “So, this show. [sic] It’s based on my two daughters -- one a musical theater major, the other a genius who went to Harvard but now wants to be a comedy writer -- who moved back in when my husband and I were really starting to have a good time without them,” the producer writes, making sure to mention that one of her daughters went to Harvard. Isn’t there a bumper-sticker for that?

“Almost everything in the pilot is something that happened in my own life,” writes this producer, as if this is supposed to represent some sort of selling point for the show. She apparently assumes that a TV comedy about her life will interest everyone else. News flash: It does not.

She also expresses her hope that the show will feel “real and truthful” to the columnists and critics who will preview it and then review it. I have no way of knowing what’s “truthful” or not in this show. Here’s a line from the pilot, uttered by the Mom in the show (played by Carrie Preston), that I doubt was actually said by anyone in the real life household of Suzanne Martin: “Men are like balloons,” says the TV version of this show’s creator. “They don’t want anyone to pop ’em and show that it’s all just air inside!” Oy.

Some time around the middle of the first episode -- not more than 12 or 13 minutes in -- I wrote this exasperated observation in my notes: “This must be the longest half-hour in the history of time-keeping.”

Or to put it another way: Enough already.