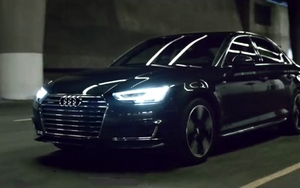 Audi is launching an effort focused on the Audi A4 that follows the theme “Intelligence is the new Rock and Roll.”

“We wanted a campaign that resonated with a wide audience in a relatable way,” Loren Angelo, director of marketing, Audi of America, tells Marketing Daily. “Using music to illustrate the impact of the changing times allowed us to do that.”

The campaign, created by San Francisco-based Venables Bell & Partners, is anchored by a 60-second spot called “Rock and Roll” which celebrates the arrival of the A4 as a symbol of a new era where smarter means better, brainier means sexier and knowledge trumps all. The spot illustrates how intelligence is the new rock and roll, with tech developers drawing crowds, CEOs trading suits for sneakers, and scientists growing loyal fan bases.

Two additional 30-second spots are called “Pilotless” and “Touch.” “Pilotless” showcases the new piloted driving features in the A4 -- adaptive cruise control with stop & go and traffic jam assist. The semi-autonomous driving feature automatically maintains distance from the vehicle in front, including braking and accelerating, between 0 and 37 mph. “Touch” shows how, every day, technology is getting smarter and more powerful with Audi A4 at the forefront.

“To cement its place in the lineup, we wanted to highlight the industry-leading innovations,” Angelo says. “Technology is immersed in every aspect of culture and life today, and its impact is undeniable. The creative campaign for the Audi A4 embodies this movement.”