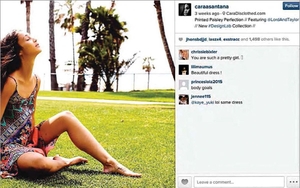 Lord & Taylor has agreed to settle a Federal Trade Commission complaint over an online ad campaign with social media and native-ad components, the FTC announced on Tuesday.

The department store has promised to ensure that endorsers disclose when they have been paid to tout the company's merchandise. The company also promised that it will not misrepresent that paid ads are from an independent source.

The case marks the first time the FTC has brought an enforcement action for a native ad campaign since it issued native-ad guidelines last December.

The FTC's move against the retailer is seen as sending a warning to marketers engaged in both native and social ad campaigns.

She adds that the case "obviously indicates that the FTC intends to police the marketplace and police the guidelines through enforcement actions."

The settlement stems from a splashy March 2015 campaign for a paisley sundress from the store's private-label line, Design Lab. The effort reached an estimated 11.4 million Instagram users, and the dress at the center of the campaign quickly sold out.

The native portion of the campaign involved an article about Design Lab that ran last year in the online version of Nylon magazine. Lord & Taylor paid for the piece, and "reviewed and pre-approved" it, according to the FTC. But the article didn't disclose the payment.

For the social media portion of the campaign, Lord & Taylor gave the dress to 50 influential fashion bloggers, and paid them between $1,000 and $4,000 each to model the dress in photos posted to Instagram, the FTC alleged in its complaint.

The company told the bloggers to style the dress however they wished, and to mention it in the post by using @lordandtaylor and the campaign hashtag, #DesignLab.

Lord & Taylor approved the posts before they went live and made some "stylistic edits," according to the FTC.

"None of the Instagram posts presented to respondent for pre-approval included a disclosure that the influencer had received the dress for free, that she had been compensated for the post, or that the post was a part of a Lord & Taylor advertising campaign," the FTC alleged.

The FTC's allegations reflect its longstanding view that failing to disclose that an endorsement is paid-for is in itself deceptive, even if the product that's advertised is depicted accurately. The agency took that position in its 2009 online endorsement guides, and reiterated it as recently as last May.

"It's a very distinct perspective, but one we have seen in a few cases now," she says.

For instance, in March of 2014, the agency sent a letter to Cole Haan about its "Wandering Sole" contest on Pinterest. The contest called for people to create Pinterest boards with images of five Cole Haan shoes, and to tag the images "Wandering Sole." Whoever posted the most creative entry would receive up a $1,000 shopping spree.

The FTC said it didn't believe the hashtag "Wandering Sole" adequately communicated that users had a financial incentive. The agency did not bring charges against Cole Haan.

The consent decree against Lord & Taylor, which will be in place for the next 20 years, doesn't involve financial penalties. But if Lord & Taylor violates the terms in the future, the FTC could seek damages at that time.

"It's a noose around the neck of Lord & Taylor for the next 20 years," Goldstein says.

Among other terms, the consent decree requires Lord & Taylor to provide endorsers with written statements outlining their obligation to "clearly and conspicuously" disclose material connections to the company. Endorsers must sign and date those statements, and return them to the company.

Lord & Taylor said in a statement that it is "deeply committed to our customers and ... never sought to deceive them in any way."

"A year ago, when it came to our attention that there were potential issues with how the influencers posted about a dress in this campaign, we took immediate action with the social media agencies that were supporting us on it to ensure that clear disclosures were made," the company stated.