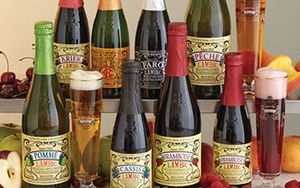 After two years of declines, consumer perceptions of many major beer brands are on the rebound, according to an annual ranking by YouGov BrandIndex, timed for St. Patrick’s Day.

The results reflect responses of 36,000 adults 21 and over interviewed over the past 16 months (+/- 2.5% margin of error) for BrandIndex’s buzz score, which asks: “If you've heard anything about the brand in the last two weeks, through advertising, news or word of mouth, was it positive or negative?" A score of zero indicates equal positive and negative feedback.

Bud Light rose to fourth place from eighth, as its score rose from 6.1 to 9.1.

Heineken dipped from #4 to #5, although its score rose from 6.7 to 8, because of Redd’s’ jump up the rankings and the higher scores seen by so many of the brands this year.

Corona — currently airing a TV spot featuring Adrien "The Problem" Broner, tied to its “Premier Boxing Champions” sponsorship — also declined by one place, to #6, although its score rose from 6.6 to 8.

Stella Artois remained in seventh place; its score rose from 6.4 to 7.9.

Dos Equis — now in the news for its decision to change the actor playing its iconic “Most Interesting Man” brand character — dropped from #3 last year to #8 currently, even as its score rose from 6.9 to 7.1.

Blue Moon, not in the top 10 last year, secured the #10 slot this year, with a 6.9 score — bumping Pennsylvania-based Yuengling out of the top 10.

The top 10 rankings in Boston, Chicago and New York are published on the BrandIndex site.

Beer remains the king of U.S. alcoholic beverages: A quarter of adults say it’s the alcoholic drink they imbibe most often (versus 16% for second-place wine), and 44% of all adults, and 48% of Millennials and Hispanics, say they are beer drinkers. However, a quarter also report that they are drinking less beer than they did a year ago.

The numbers reflect the continuing “premiumization” trend, driven by the popularity of premium, imported and craft beers, confirmed Mintel food and drink analyst Beth Bloom. (Craft beers’ share of the U.S. beer sales nearly doubled, from 5.2% to 10.2%, between 2010 and 2015.)

She added that innovation — in packaging, styles and most notably in flavors — is a major contributor to the continuing, if modest, increase in dollar sales.

Last year, 20% of U.S. beer drinkers reported drinking flavored varieties, with fully 39% of women 22 to 34 reporting the same. In addition, 57% of beer drinkers who increased their beer consumption in 2015 cite a wider availability of flavors as a reason.

Meanwhile, the proportion of unflavored beer launches declined from 85% of the total beer market in 2010 to 73% last year, according to new Mintel research.