It's All Greek (Again) To Windex 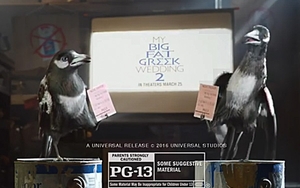 Fourteen years ago, Windex found itself in the unexpected position of being a centerpiece product in the hit movie, “My Big Fat Greek Wedding.” With the sequel coming out later this week, the brand is prepared for another onslaught.

The SC Johnson brand has launched a marketing campaign encouraging people to “#PutSomeWindexOnIt,” based on one character’s affinity for the glass cleaner to cure a variety of ills, few of which were related to cleaning glass. The effort will include a marketing program with traditional, experiential, retail and social media highlighting the brand’s appearance in the film. Activations include promoted content on BuzzFeed and a “blue carpet” premiere of the film in New York.

A television commercial touting the tie-in features the brand’s mascot pigeons in front of a home-movie screen encouraging people to go see the movie, to “learn how to use Windex the right way,” rather than for cleaning windows. The brand is also enabling consumers to get a discounted ticket to the movie by visiting, www.windexmovieticket.com.

“When I was writing both scripts for My Big Fat Greek Wedding, I based the father character on my own dad, who truly believes in the power of Windex products, and that even the word itself is Greek," said the movie’s writer and star Nia Vardalos, in a statement.

While Vardalos’ use of Windex in the first movie was personal, this time around the writer/actor and brand partnered to ensure the brand was able to capitalize on the expected buzz, and the brand has been using social media to amplify the experience. The brand is using the hashtag #PutSomeWindexOnIt and encouraging people to share their own Windex stories to own the tie-in.

1 comment about "It's All Greek (Again) To Windex".
Check to receive email when comments are posted.
Next story loading