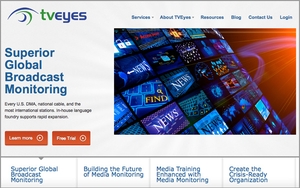 Online news monitoring service TVEyes is asking an appellate court to rule that the company's entire business model is protected by fair use principles.

The company is seeking to overturn a decision issued last year by U.S. District Court Judge Alvin Hellerstein in Manhattan, who ruled that some components of its paid service -- including features that allow users to download clips for offline viewing -- are not protected by fair use. In November, Hellerstein issued an order prohibiting TVEyes from continuing to offer those features.

TVEyes, which obtained a temporary stay of the injunction, is now asking the 2nd Circuit Court of Appeals to vacate the order.

The battle dates to 2013, when Fox sued TVEyes for allegedly infringing copyright with its $500-a-month online monitoring service -- which is used by journalists, the White House, politicians and the U.S. military, among others.

Hellerstein ruled in September of 2014 that TVEyes makes fair use of Fox's material by indexing its news clips and providing snippets of them to subscribers. But the following August, he ruled that other components of TVEyes' service -- including functions enabling subscribers to download clips for offline viewing, email clips to others, and to search programs by date and time -- are not protected by fair use.

The company says in papers filed this week that Hellerstein "inexplicably carved up TVEyes’ business model, enjoining TVEyes from allowing its subscribers to e-mail, download or run date/time searches on the very same television clips."

TVEyes argues that all of its functions are "transformative," and therefore protected by fair use, because they enable subscribers to access clips for research purposes. The company also says that those functions don't harm Fox's licensing business.

"Fox and TVEyes serve entirely different markets that do not overlap," TVEyes argues.

The company adds that Fox's licensees, unlike TVEyes' clients, "are contractually prohibited from criticizing Fox."

The high-profile battle has drawn attention from other news organizations, as well as broadcasters. CNN, CBS and NBCUniversal, sided with Fox last year, arguing that the fight over the news clips "affects all creators and publishers of broadcast and digital content."

TVEyes drew outside support from a coalition including Victor Navasky -- The Nation's former editor and publisher -- The Nation columnist Eric Alterman, media company Brave New Films and media-watch group Fairness and Accuracy in Reporting. They argued that media critics require the ability to download and share clips.