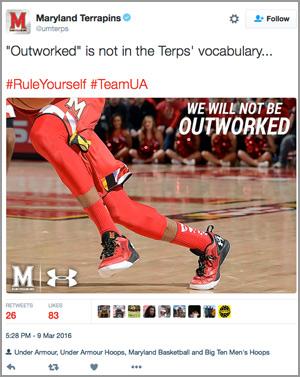 UnderArmour, which has been looking for viral love with its #RuleYourself videos featuring stars like swimmer Michael Phelps, the USA Gymnastics team, and Netherlands' soccer star Memphis Depay, is taking its campaign to the masses. Via Twitter and Instagram, it’s encouraging athletes everywhere to share their personal workout rules.

The posts are intended to further the hard-working spirit of the UnderArmour campaign, with its “It’s What You Do in the Dark That Puts You in the Light” tagline. To kick off the call for action, it asked its roster of athletes, including NBA All-Star Stephen Curry (“I am stronger than my strongest excuse”), Phelps, and NHL MVP Carey Price. And it helps that the University of Maryland Terrapins, alma mater of UnderArmour CEO Kevin Plank, is one of just two UA teams who made it to the Sweet Sixteen.

Timing new campaigns for March Madness is almost a given for any athletic brands, but may be especially strategic for Under Armour and its basketball ambitions. While both Nike and Adidas have more clout on the court — the NPD Group reports that Nike went into the tournament with shoe contracts with 44 of the 68 teams and provides uniforms for 41 of them, and Adidas provides uniforms for 14 — UA is increasing its influence, suiting up 10 teams, compared with six last year. And in extending its partnership with Curry last year, it locked in a relationship with perhaps the most marketable face in the NBA.

It’s not so much about selling shoes right away. While March Madness represents the “fifth most important selling period for basketball shoes,” says NPD analyst Matt Powell in a recent blog (following Christmas, the NBA All-Star game, Black Friday and Back-to-school), the real reason is marketing: “Signing college teams is more of a marketing ploy than a direct sales story. These contracts can be worth several hundred million dollars,” he says. “The contracts can include footwear, uniforms, other apparel, and direct payments to coaches.”

The campaign was prepared by UA in-house, and is intended to capture the “24/7 grind” athletes push through so they can succeed, and the “joy of missing out.” In its first week, it says it activated about 100 athletes, influencers and teams, generating 30,000 #RuleYourself mentions, sparking 1 million social engagements.

Participants can win gear, but also glory: UA says it intends to compile a monthly video featuring the best and most inspirational rules, which it will then pump out across its social channels. The spokesman expects the first compilation to be released in April, and the campaign runs through June.

Heading into April with the Masters tournament, UA says it expects golfer Jordan Spieth to post his personal rules, as well, as well as other UA athletes.