Jack In The Box Offers Annoying Company For Lone Diners 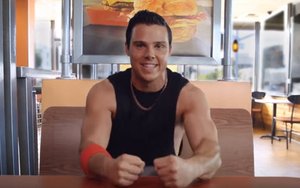 No need to feel awkward if you’re a guy eating alone at Jack in the Box this month.

The chain, showing empathy for the estimated 83 million people who eat alone at fast-food restaurants each year, is offering videos of “buddies” available for yammering at any diner with a smartphone.

The concept is a humorous way to promote Jack in the Box’s current offer of two breakfast croissants for $4. Tagline: “Even if you share two croissants with yourself, it doesn’t mean you should eat by yourself.”

Fans are being encouraged to visit a Hungry Buddy area on the brand’s site, where there are three companions from which to choose. Each features an eccentric (but all-too-true-to-life) character filmed so that he or she appears to be facing the user across the dining table, while jabbering nonstop for three minutes.

The characters, also posted on YouTube, are the muscle head who calls you “bro” and can’t talk about anything but working out; the awkward childhood friend you used to share comic books with (video below); and the ex-girlfriend you had to get a restraining order against.

The videos, from David&Goliath, L.A., are being promoted in-store as well as through the brand’s social media channels and digital display ads.