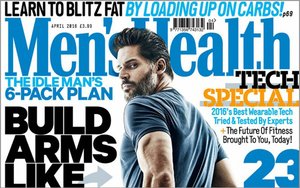 Hearst Magazines UK will add two new titles to Magzter, the largest digital magazine newsstand. Men’s Health UK and Cosmopolitan UK will be available on Magzter Gold, the app’s Netflix-like, “All You Can Read” subscription service.

More Hearst Magazines UK will be added to Magzter soon.

Hearst Magazines UK is the publisher of 19 magazine brands and five digital brands, including Cosmopolitan, Good Housekeeping, Elle and Harper’s Bazaar. It is the largest digital magazine publisher in the UK with a digital audience of 15 million monthly unique users.

All of Hearst Magazines titles from the U.S. have been available on Magzter since April 2013, and Russia’s Hearst Shkulev Media titles are also available on the app.

Published 11 times a year, Men's Health UK is priced at £29.99 for an annual subscription on Magzter. Men's Health magazines from other countries, such as Singapore, South Africa, Turkey and Thailand, are also available on Magzter.

The monthly Cosmopolitan UK is priced at £9.99 for an annual subscription on Magzter. Cosmopolitan magazine from countries like the U.S., India, Malaysia, South Africa, Australia, Mexico, Spain, Slovenia, Chile, Philippines, Turkey, Sri Lanka and Indonesia are also available on Magzter.

Magzter is best known for Magzter Gold, which allows users to binge-read as many articles as they want. Currently, over 3,500 international digital magazines are available on Magzter Gold.

Vijay Radhakrishnan, president and co-founder of Magzter, previously told Publishers Dailythat he hopes to get all the publishers on Magzter on board with their Gold subscription service by the end of 2016.
health, hearst magazines, men, uk, women
Next story loading