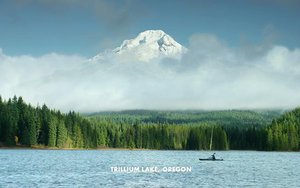 Oregon is more than the popular conception of it as Portlandia and a new marketing campaign aims to let would-be visitors know it, but without any braggadoccio. The invite reads, “We Like It Here, You Might Too.”

In broadcast TV spots, cinema, and outdoor,  the effort enlarges upon its award-winning “7 Wonders of Oregon” campaign by describing in a slightly jocular tone what makes the Beaver State so special. An interactive website allows visitors to share they favorite Oregon experiences.

"Oregon is an inspiring, beautiful and geographically diverse part of the country and we want more people to explore and enjoy it," said Eric Baldwin, creative director for Wieden+Kennedy. "Oregonians are humble though, so we thought it would be fun to undersell the magnificence." Ten state residents star in the video spots with products from five Oregon brands.

Allison Keeney, Travel Oregon spokesperson, says overnight leisure travel to the state ramps up in the spring/early summer and accounts for a quarter of its annual travel. The peak comes in the summer months, which accounts for more than a third.

Media spend for the spring effort is $1.8 million, compared to $2 million a year ago, she says. But the big spend was two years ago, when the state spent nearly $3 million to launch its “7 Wonders of Oregon.” That campaign won the National Council of State Tourism Directors 2015 Mercury Award for Best Branding and Integrated Marketing Campaign. The council is an industry arm of the U.S. Travel Association.

Todd Davidson, CEO of Travel Oregon, said in a press release that “every $1 we invest in advertising generates $237 in visitor spending.”