TV's Tiny House Craze: Is This The End Of The American Dream? 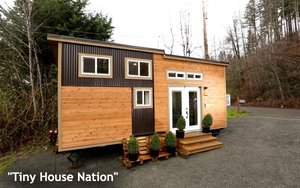 Many of the snarky observations I planned to write here about all of the "Tiny House" shows now on TV have already been made by others.

I learned this when I went on Twitter the other day to see what people have said about these shows in which singles, couples and even families with children are in the hunt for homes that can be as small as 200 square feet.

For example, there is the question that occurs when watching nearly every episode of "Tiny House Hunters" and any one of the other "Tiny House" shows on HGTV and also A&E-owned FYI: Why do so many of these people seem so surprised when there’s very little closet space or there’s no room for them to stand up in the sleeping loft?

The Twitterverse has this one covered. “I love folks who want to buy a tiny house then complain about how tiny the houses are,” said one such tweet. “And do you really need a king-size bed in 300 sq ft?”

On that same subject, another viewer tweeted: "I don’t understand y ppl on tiny house hunters walk into a tiny house and say 'its so small in here!'"

TV’s tiny house craze currently consists of at least six shows -- three on HGTV and three on FYI, which, it should be noted, came first to the tiny house trend with its show called "Tiny House Nation," which premiered in July 2014. The show’s third season starts Saturday (March 26) at 9 p.m. Eastern.

The shows cover the tiny house movement in all its aspects -- buying them, building them, living in them, and on some of the shows, gussying them up with shrewdly designed luxury add-ons.

The people seen on the shows offer a variety of rationales for seeking to set up housekeeping in a space where on one recent show there wasn't even room for a toilet (though there was an outhouse). For very young couples, there's the affordability factor, since most of the houses on the various shows are priced generally in the mid-five figures. The younger people often say they want to spend less money on their homes and more money on leisure activities such as traveling.

At other times, older people are featured on the show -- empty-nesters who are either couples or singles -- who are seeking to downsize and/or reduce their cost of living. Occasionally, a tiny house hunter will voice more lofty reasons such as environmental concerns (taking up less space, using less fuel and the like).

TV's tiny house shows all try to give the impression that tiny house living is a trend that is sweeping the nation. That's not necessarily so. An online search for information on tiny houses says only 1 percent of home buyers purchase a home under 1,000 square feet. In addition, you soon learn from various online sources that many communities are not zoned to allow houses of 500 square feet or less, particularly if they're on wheels, which would classify them as campers or mobile homes that are also unwelcome in many places.

However, there are apparently enough enthusiasts -- people seeking to live in tiny houses and contractors who are working full time to build them -- to sustain six TV shows on the subject. There's even a national Tiny House Conference scheduled for next month in Asheville, N.C. (ironically home to the largest house in the United States, the Biltmore Estate)

"Just watched Tiny House Hunters for the past 3 hours. Someone help," read a recent tweet that articulated the addictive nature of these tiny house shows.

"Tiny House Hunters is how I know capitalism has failed us," wrote one viewer on Twitter, echoing something I have also pondered when watching these shows. Is this what we've come to, where our ambition for home ownership is to be satisfied by a tiny compact space where the single bedroom is only accessible by a ladder and you can't stand up in it?

This means either that the traditional American dream of home ownership is dead, or it's evolving into something new and, for some people, something better.

Or to put it another way: Who needs a toilet anyway?

tv
3 comments about "TV's Tiny House Craze: Is This The End Of The American Dream?".
Check to receive email when comments are posted.
Read more comments >
Next story loading