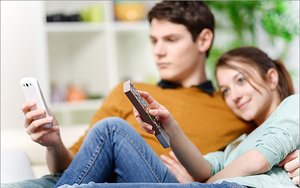 TV consumers that don’t multitask while watching TV are now a tiny minority.

More than 90% of U.S. consumers are now multitasking while watching TV, according to a study from Deloitte, the audit, consulting, tax and advisory service.

Looking specifically at Millennial TV viewers -- 19-25 -- they engage in an average of four additional activities while watching TV, including general surfing the Web, using social media behavior and text messaging.

Growing streaming video services continue to make a big impact with more than half of all consumers, and three-quarters of millennials, watching movies and TV shows via streaming on at least a monthly basis. Millennials aged 26-32 who currently pay for streaming video have an average of three subscriptions.

The value of streaming services for subscribers has tripled in the last three years -- now at 61% from 17% in 2012.

With regard to new TV platforms and technologies, 35% of Baby Boomers ages 50 to 68 who binge watch do so once a week and average four episodes per sitting. Over half of U.S. consumers who binge watch choose television dramas.

The Deloitte study was produced by an independent research firm Nov. 5 to 19, 2015 from an online methodology among 2,205 U.S. consumers, with data weighted to the most recent U.S. census.