Why Everyone In Ad Tech Hates Their CRO 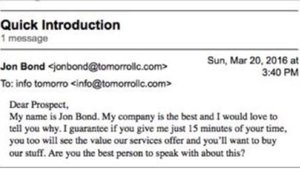 How many of you have gotten an email like this?

How often have you actually responded?

Now you know where a good part of the $2.5B that VCs have thrown at Ad Tech firms (in the past two years alone) is going.

Direct Sales in Ad Tech is increasingly ineffective, unless it is supported by GOOD MARKETING. 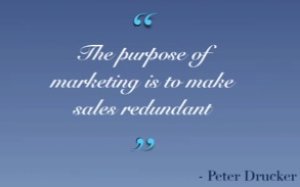 Marketing in the ad tech space, however, is generally poor and of the “spray and pray” variety: poorly conceived generic ideas, non-strategic PR activities, and pay-to-play conferences that have limited credibility.

Prospect email addresses are for sale resulting in endless spam. And as the headlines make very clear, ad tech firms AREN’T making their numbers; hence, everyone hates their Chief Revenue Officer (CRO). The approaches that worked for them as they climbed the sales ladder in the 2000s are increasingly ineffective…the straight ahead charge is like running into a brick wall, which only works if you are on platform 9 3/4 heading to Hogwarts. For those of us in the Muggle world though – we need a different kind of “MAGIC.”

Pull Not Push and How to Get “Pull”

How do you get prospects to WANT to see you and not AVOID you?

Don't ASK anything of anyone.

Don't talk about the PRODUCT until asked.

How does this “SELL” anything?

The idea isn't to sell; it's to get prospects to want to buy. That’s “PULL.”

Ideas that turn the tables from PUSH to PULL are very rare. They are more than just

"inbound marketing." They literally redistribute POWER from the buyer to the seller. I

What is a Marketing Unicorn? 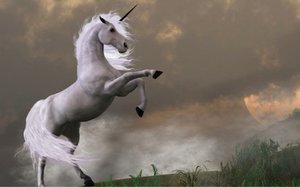 They meet the following criteria :

A. Building your thought leadership presence among the C-levels who must approve your proposals , but whom your salespeople rarely get to meet.

B. Physically putting you in front of people who write checks and who want to be there!

C. Transferring power from the BUYER to the SELLER.

D. Are repeatable, and capable of building equity over time.

For the past two years, White Ops has teamed up with the ANA to produce an annual study on bot fraud – the first of its kind. 35-40 major brands participate each year.

The first conference focused on the growing premium programmatic market has helped make Sonobi the leader in this growing niche. They have done three of these conferences so far.

In partnership with Forbes, Appinions’ influence marketing technology ranked the top CMOs, giving them the power associated with publishers who rank people and companies (e.g. Forbes 400, A list agencies , Fortune 500, Best/Worst Dressed etc.) The program ran for three years until Appinions got acquired.

The Outcome: A Little MAGIC

When salespeople show up, clients magically write orders on the spot. The salesperson, of course, thinks he or she has become a genius. They haven’t. But who cares? That’s part of the magic.