Target Out To Digitally Disrupt Salad: How Fresh Is That Produce? 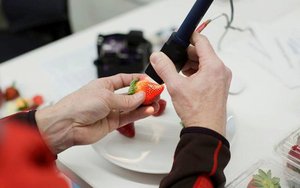 When Target first announced its partnership with the MIT Media Lab last October, it was hard to imagine just what the retailer meant, exactly, when it said it wanted to give people more power over their food.

But it has just unveiled the first two projects, which put its disruptive approach to making food shopping more transparent in better perspective. In one test, an effort to develop real-time information about nutrition, people can scan produce they’re thinking about buying with a digital device that determines its freshness, and then pay accordingly. And another is a line of products called Good & Gather, with packaging that prominently highlight ingredients in big letters on the front of the package.

Target spelled out more details about the Food + Future coLab, a multi-year collaboration with global design firm IDEO and MIT Media Lab, back in January.

In announcing the nascent tests this week, it also tipped its hand about two more projects simmering in the lab: One is a collaboration with the Open Agriculture Initiative, looking at applications for the technology. (Urban farming has been outlined as a key area of interest from the beginning.) And another involves spectroscopy, partnering with Ocean Optics to try and build a platform that “sees” inside food, evaluating nutrient levels and contaminants.

With its turnaround gaining momentum, Target execs don’t miss many opportunities to remind observers that wellness—especially regarding food and groceries—is key to its strategy. “We’re working at a pace we could only achieve by putting all the right people in one room—from retail experts to bioengineers—and then giving them the freedom, autonomy and resources to make things happen,” says chief strategy and innovation officer Casey Carl, in a blog post about the partnership. And participants says in a short period of time, they’re already much closer to helping people know more about what’s in their food.

Complaining that most people know more about their smartphones than what was in their last meal, Target has also outlined work with MIT Media Lab’s Laboratory for Social Machines, to “collect and analyze billions of public data points–spanning brand communications, traditional and social media messages and supply chain information–in an effort to map the global conversations related to food.”