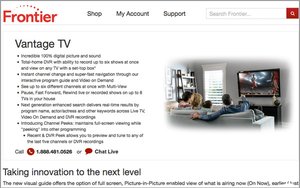 Comcast has Xfinity. Charter has Spectrum. Along those lines, Frontier Communications, which is working to bring more advanced digital video services into the home, is launching its own suite of products as “Vantage.”

“It’s a new chapter for Frontier as we expand and grow,” Jessica Sokolowski, vice president of marketing and advertising for Frontier, tells Marketing Daily. “We’re focusing more on video as a product offering to our customers.”

The telecommunications company this week launched the new brand around its high-speed TV, Internet and voice-over-Internet services. The Vantage brand will begin rolling out in Connecticut (after having had a successful test in Durham, N.C. last year) before moving into other markets over the next few years. Once complete, the video services will be available to about half of the 8.5 million customers within its footprint.

“Vantage is a premium suite of products that we’re releasing,” Sokolowski says. “As w’re releasing this product, we wanted to tie that thinking and the premium products they represent to something new.”

Like Comcast being the company that provides the Xfinity suite of services, Frontier will continue to exist as the provider of Vantage, Sokolowski says. “Frontier is the company that is bringing this premium suite of products to  consumers,” she says.

Frontier will introduce the Vantage brand to consumers via a “holistic” launch campaign that will include traditional tactics such as television, print and digital elements, as well as some experiential elements and local engagements. Sokolowski described the Vantage brand as “lively, enticing and innovative.”

Frontier is a trusted, well-established brand, but we’ve yet to bring a video product to the marketplace,” Sokolowski says. “This is unlike anything else in the marketplace.”