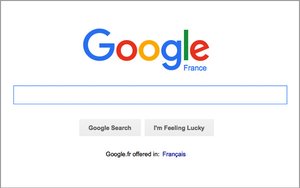 France's data protection regulators are fining Google $112,000 for failing to broadly censor its site in response to Europeans' requests to delete information about themselves.

The sanction marks the newest development in Google's long-running conflict with European officials over privacy. In 2014, Europe's highest court ruled that Google and other search engines must allow residents of European countries to delete links to certain embarrassing information about themselves from search results.

Google initially argued that the ruling only required it to delete links from a country-specific search engine, like Google.fr (the default for that country), and not Google.com, which is the default in the U.S. Last June, France's data protection unit, CNIL, said Google must remove links from all of its results pages -- not just pages geared for European countries.

The CNIL said on Thursday it was rejecting that approach.

"The right to be delisted is derived from the right to privacy, which is a universally recognized fundamental right laid down in international human rights law. Only delisting on all of the search engine's extensions, regardless of the extension used or the geographic origin of the person performing the search, can effectively uphold this right," the regulators wrote.

Google did not immediately respond to MediaPost's request for comment. But last year, the company argued that allowing one country to censor the Web worldwide would result in a "race to the bottom."